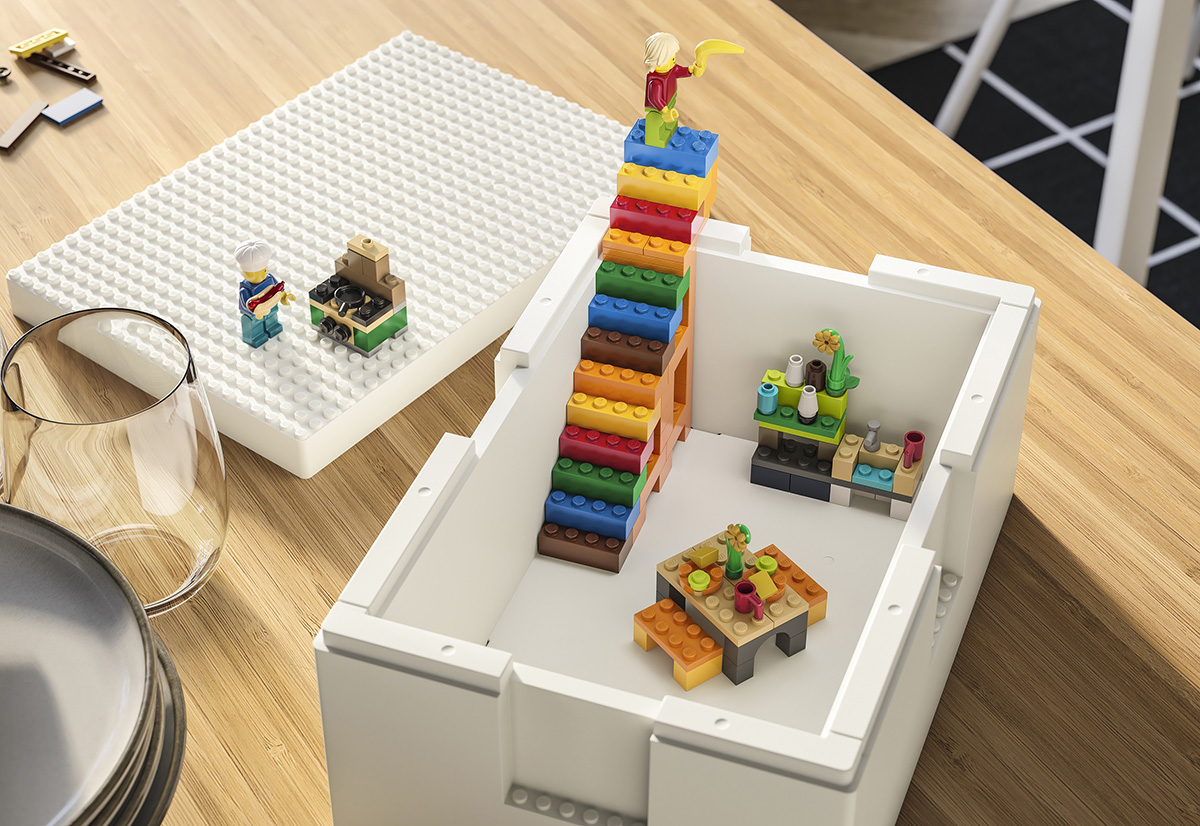 The collaboration between Ikea and Lego arrives in stores

In the last few years, Ikea has been surprising us with great collaborations such as the extraordinary one with Sonos for the Symphonisk speaker series or the one with Adidas which is still in the works (they had announced it would be the revolution for those who train at home, imagine what it could be after the lockdown experience!) and the one with the artist Olafur Eliasson announced for 2021.

Surely the announcement in 2018 of the collaboration between Ikea and Lego – think how much time and work it takes to develop a product! – created a great expectation.

From October 2020 Bygglek, the product in collaboration with Lego, will be available in Ikea stores.
“Bygglek” in Swedish means “building game” but it is not just that: it is both a game and a container element, designed to encourage adults and kids to play, making home organization more fun. 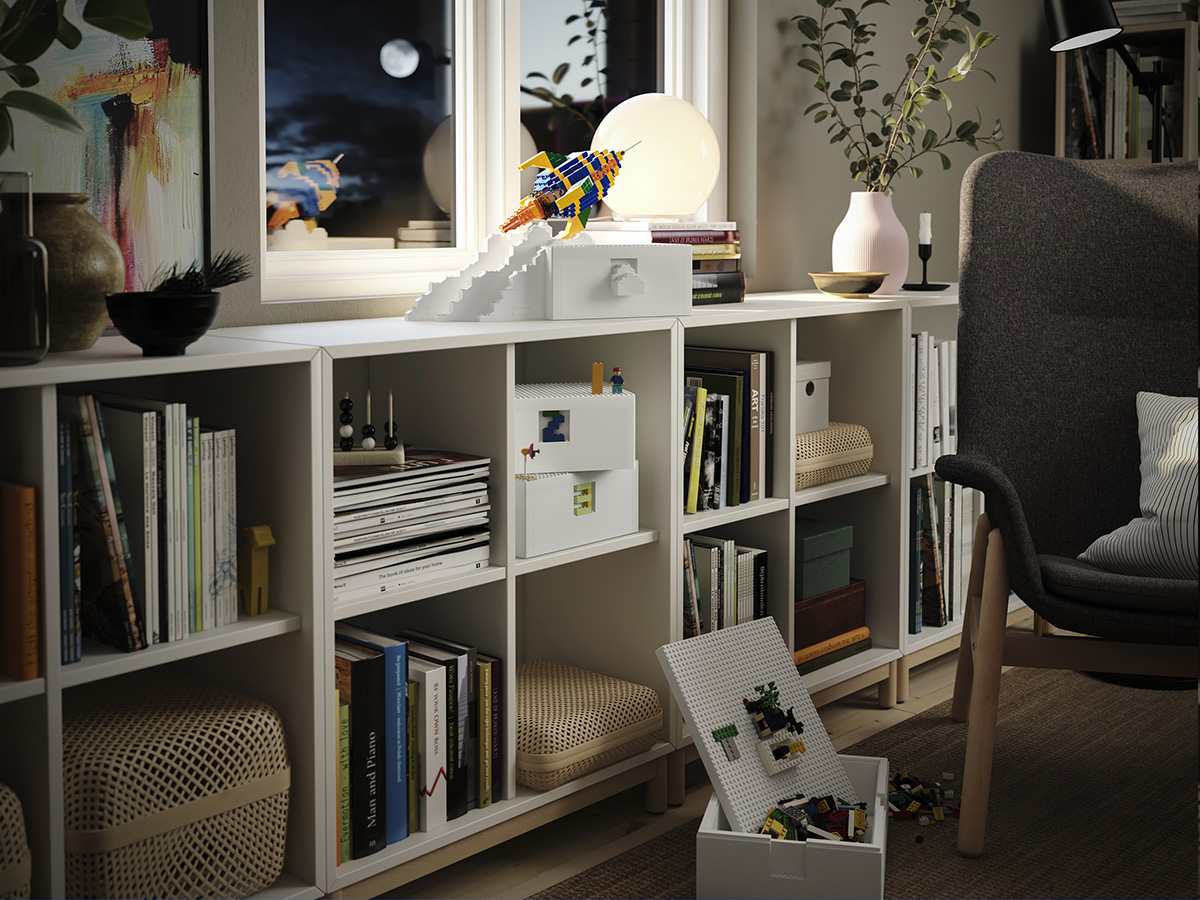 Maybe inspired by the hundreds of hacks that transformed tables and boxes into Lego stud base, Ikea and Lego have joined forces to create something together.

Take two designers, Andreas Fredriksson for Ikea and Rasmus Buch Løgstrup for Lego. Imagine the day they called them saying “you will work together in the name of Ikea and Lego and you will invent a new product that makes everyone want to play”. I think it was their dream call! Who hasn’t played with Lego bricks as a child?

“A child psychologist who worked with us told us that if we created a container that we could also play with, we would reach the goal. I remember that Ikea suggested putting the studs on the lid of the container. At the moment it seemed impossible, but then we created Bygglek, one of the largest Lego bricks in history!” Rasmus Buch Løgstrup, Lego designer 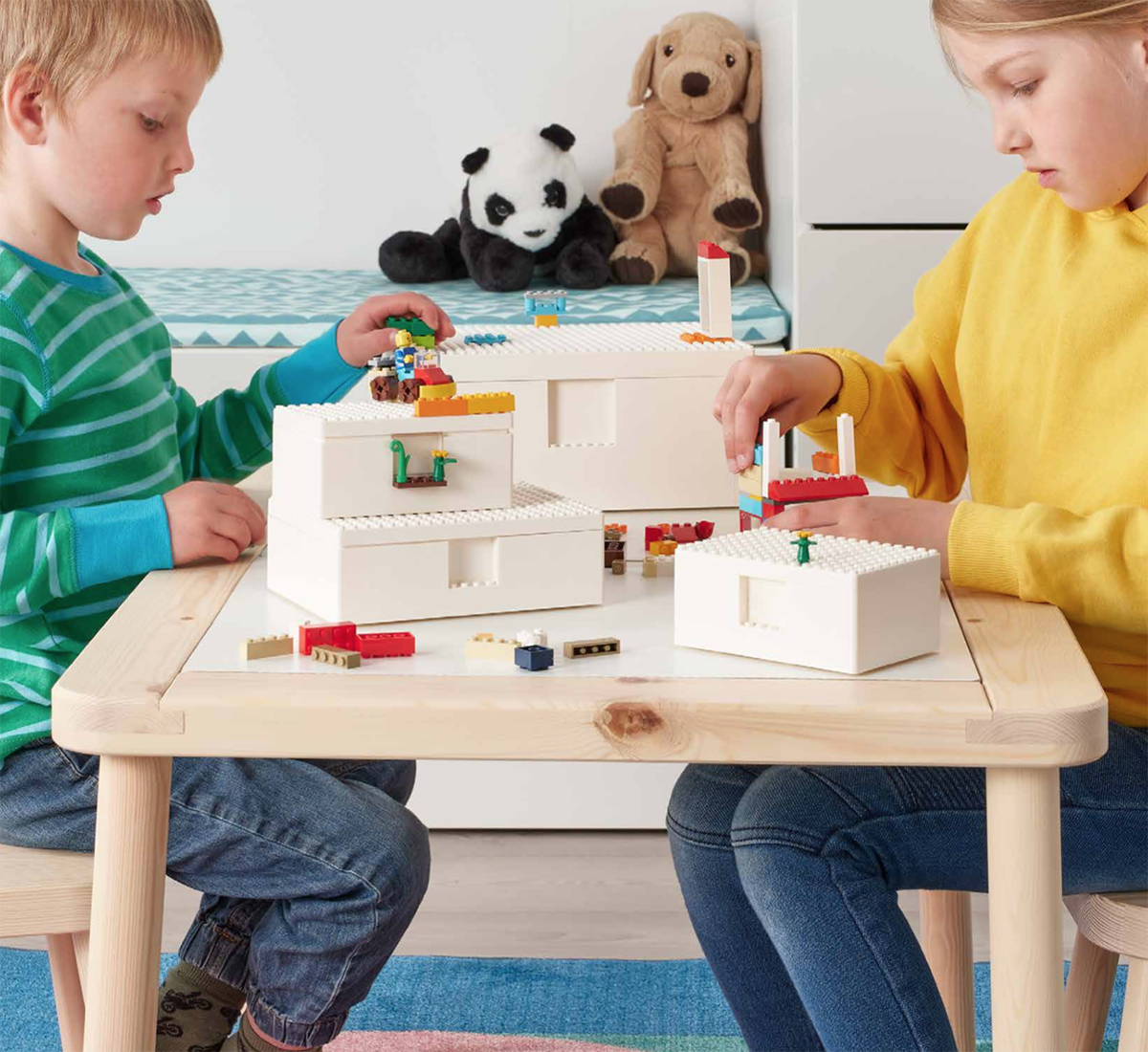 The collaboration started with Lego who wanted to create a new and fun solution to keep the bricks in order and invited Ikea … to play!

The two designers began by reflecting on the role of bricks in the home because Lego bricks are tied to the house, you don’t take them to the park or to friends’ house when you go playdate, they are a product for the home.
A floor full of bricks has a different meaning for everyone who looks at them: parents perhaps see threats for their feet, children (even those who have grown up outside) see endless possibilities for play.

Every pedagogist advises not to put away the games when the children are not there, in this way you’ll interrupt the game and break their creations, tidying is something to do together maybe transforming it into a game (if you know how to do it, please tell me!).

The solution that Ikea and Lego suggest is to “pause” the game without having to destroy what they created or leave everything lying around. 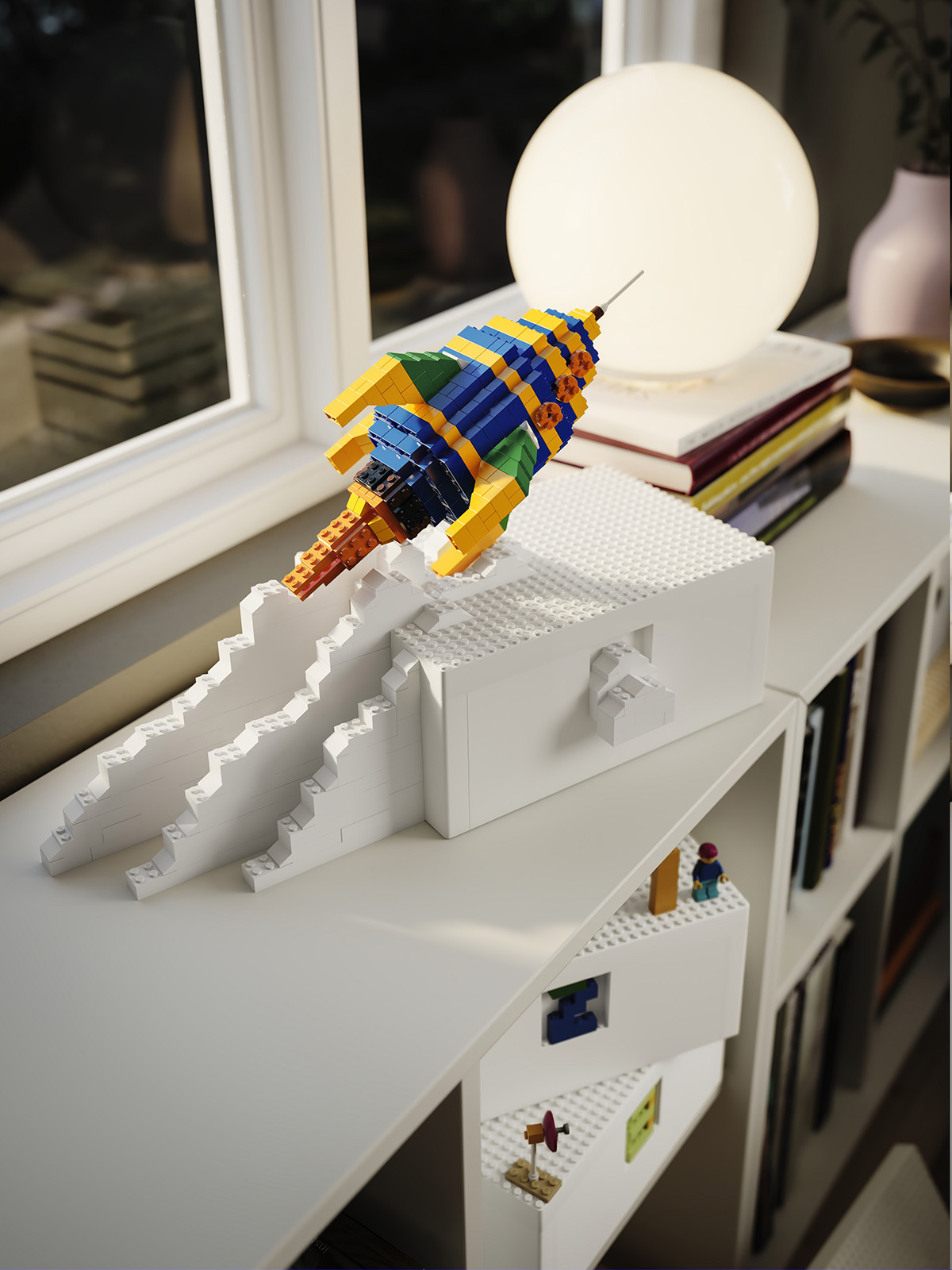 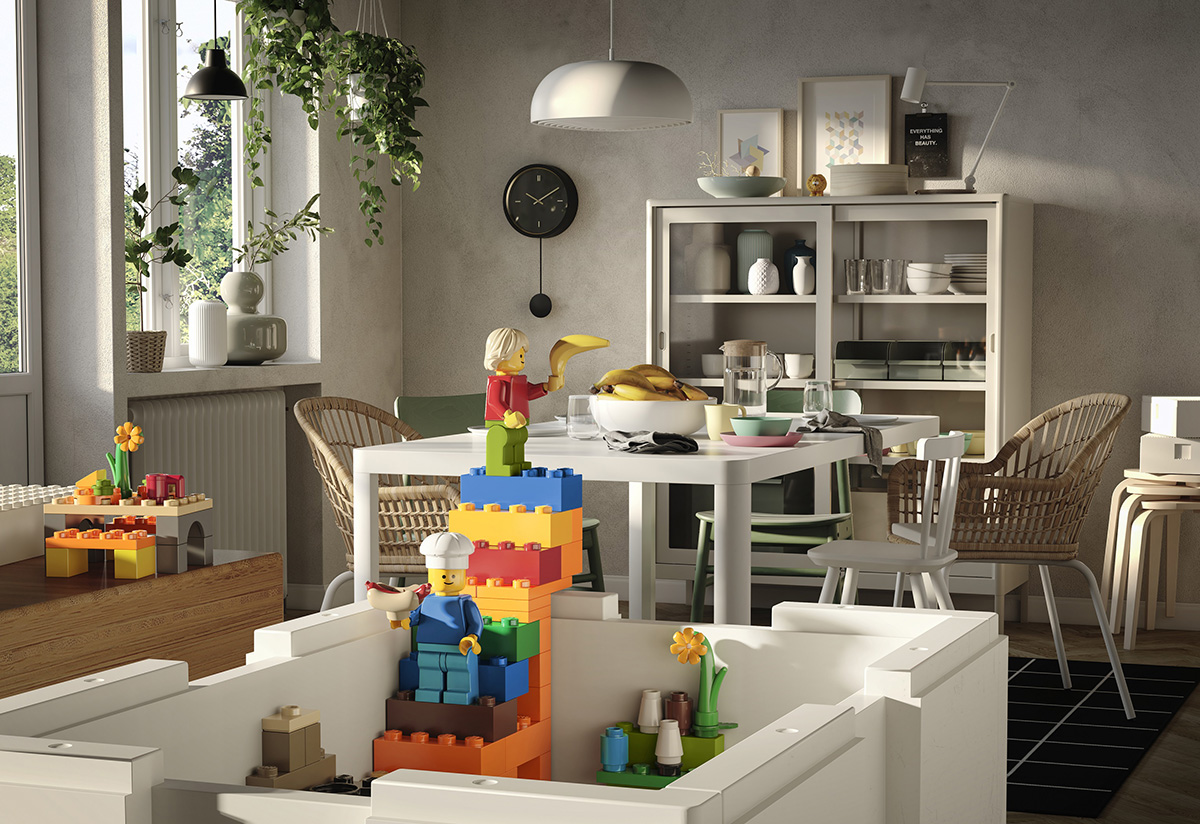 This container system comes from the idea that the container itself has to be part of the game.

Bygglek consists of four boxes of different sizes that can also be assembled together, a kind of super bricks that can contain but also offer the possibility to build on, around, and inside.

It all begins the moment you open the box, the packaging obviously arrives in flat format in the best Ikea tradition. There are no instructions but “hints” because there is no right or wrong way to assemble it, it was designed in order to a five years old child can assemble it by himself. No tools needed, the pieces clip together and it’s all made of the same material as the Lego bricks. 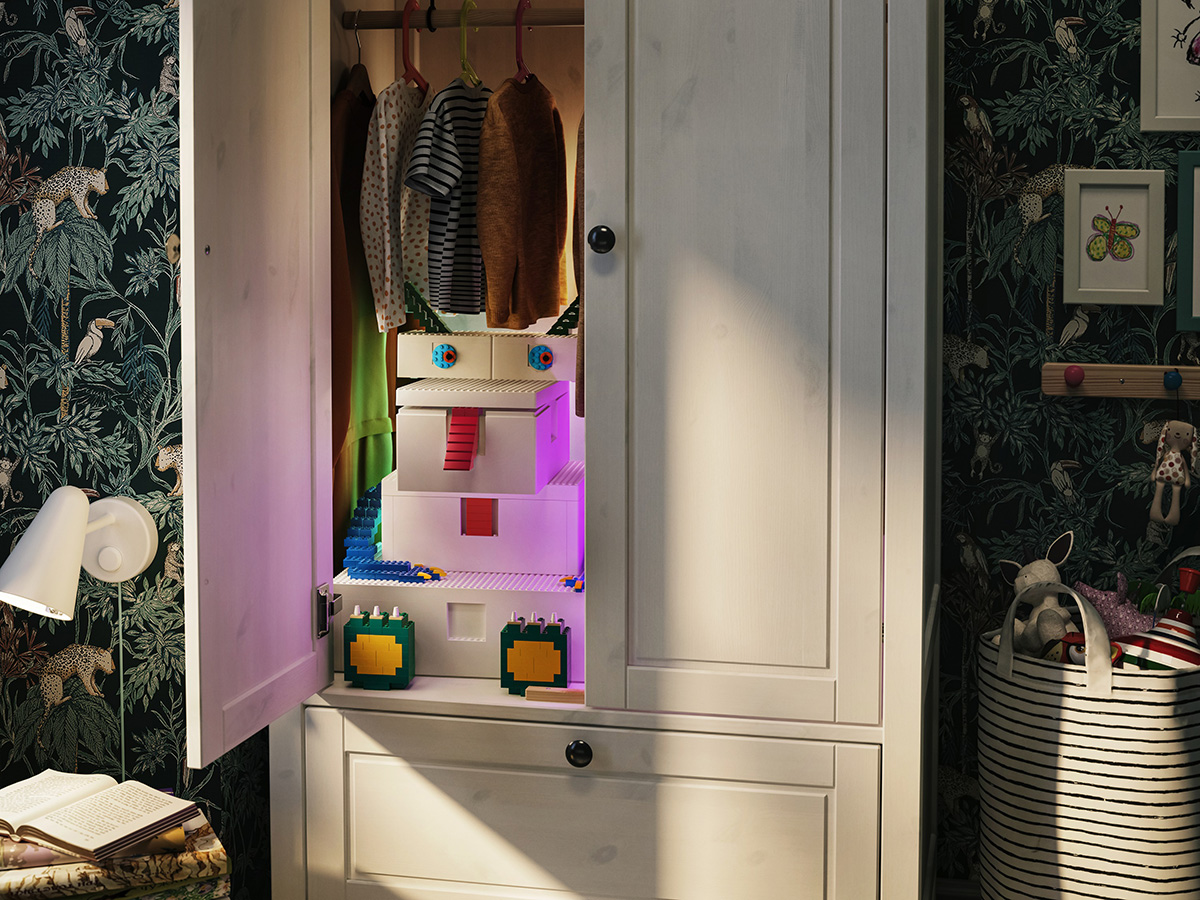 Bygglek includes an exclusive set (sold separately) of house-themed Lego bricks but it is perfectly compatible with all Lego products and sets because the idea of Lego has always been that you can combine and mix the pieces without limiting the imagination. 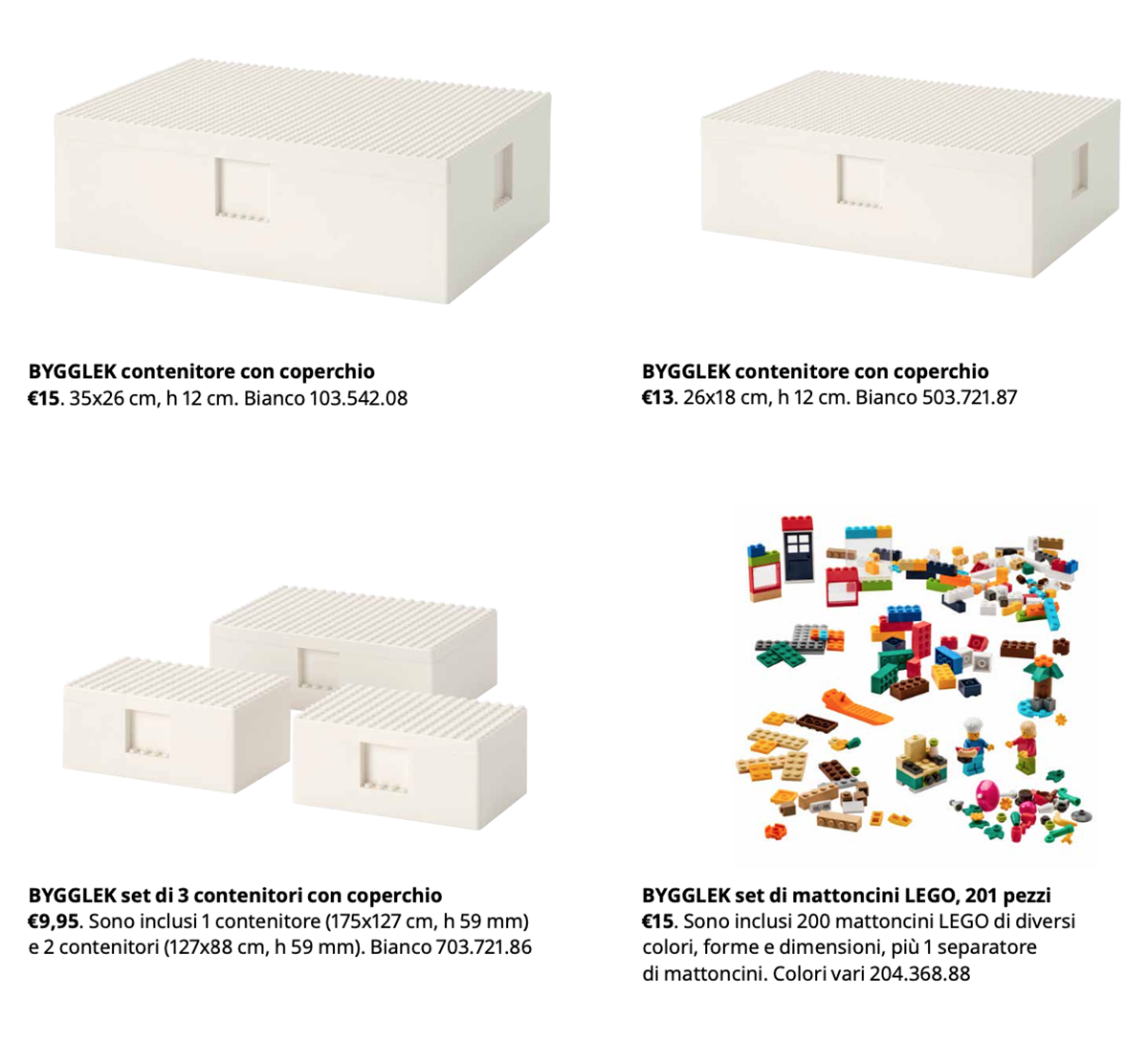