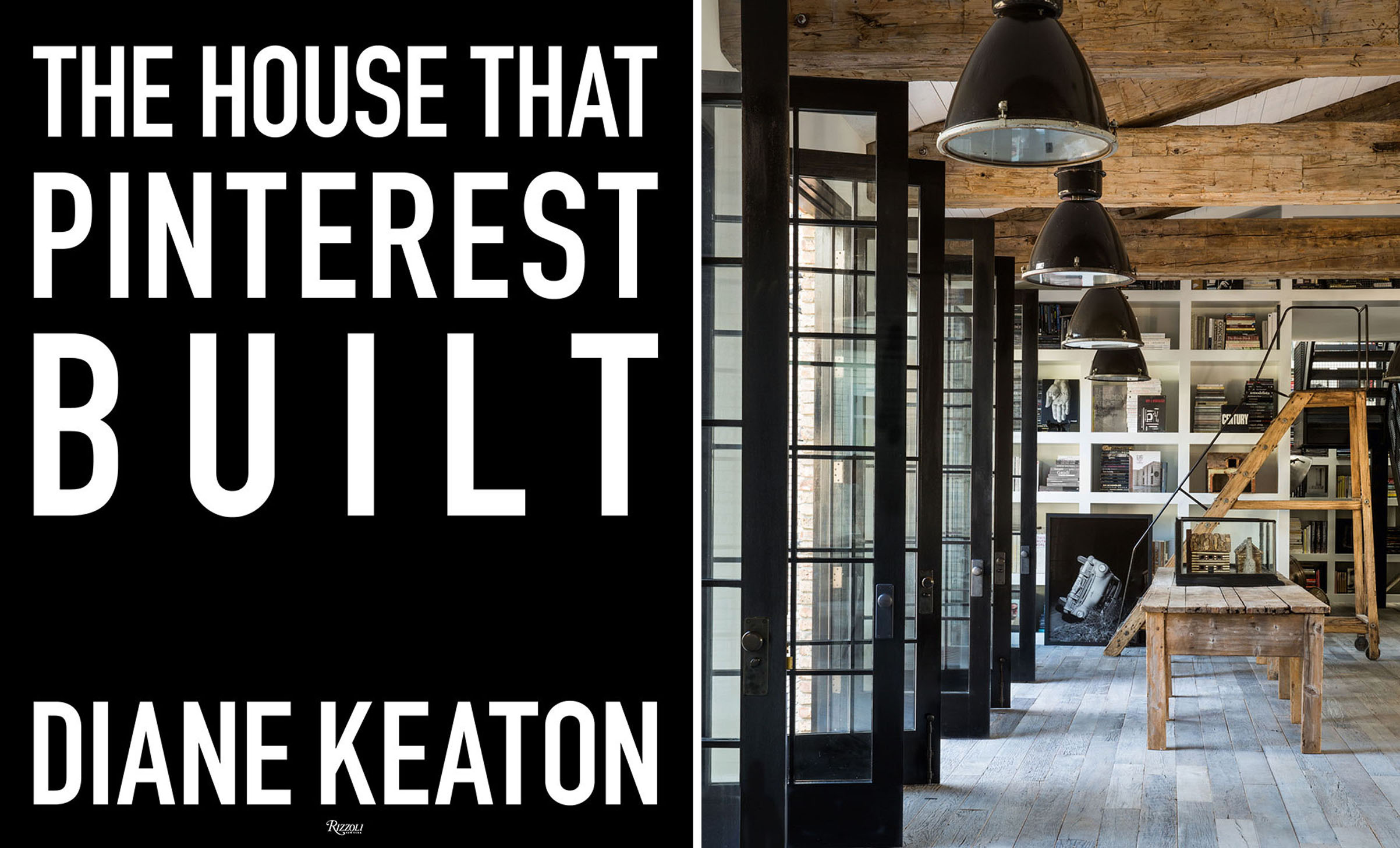 Living Room and doors in Home of Diane Keaton for the book The House That Pinterest Built.

Diane Keaton is one of us: she looks for home inspirations on Pinterest

“The House that Pinterest Built” is the new book by Diane Keaton, in which she tells how she has built and decorated her dream home using Pinterest inspirations.

If you are black and white lover you have to run and follow Diane Keaton on Pinterest! Her boards are beautiful: Tack Room Tactics, Cut From the Same Cloth, Factory Floor, Tool Kit Treasures, Connect The Dots, Hair Daze, Gif favorites… you can find a lot of inspirations! 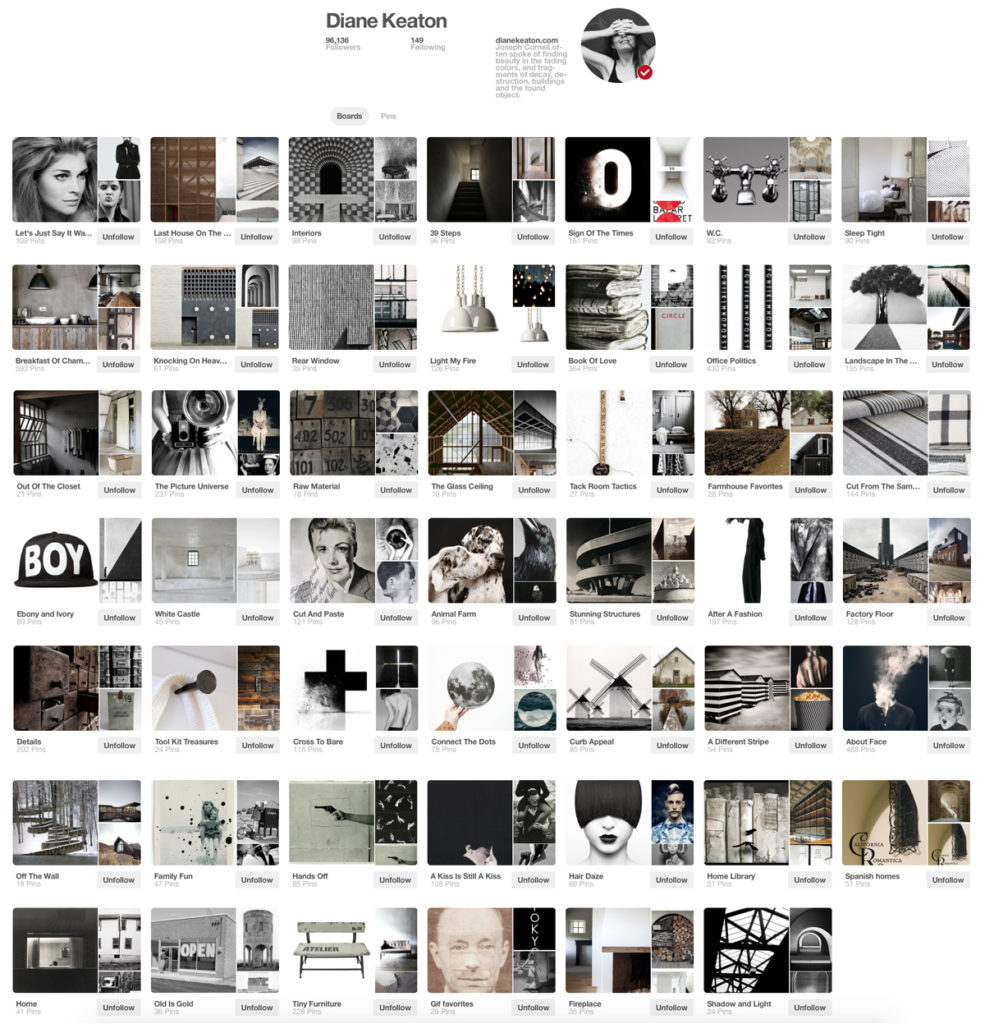 Diane Keaton is one of us: addicted to Pinterest! In 2013 she tweeted very upsted because she accidentally deleted one of her board, just like we could do!

Diane built the home of her dreams by taking inspiration from Pinterest. She tells everything about the process of creation and inspiration in the book “The House That Pinterest Built”. Nearly 800 square meters in the Sullivan Canyon near Brentwood “just outskirt” Los Angeles (how do you define the “outskirt” in a big city such LA?).

Her friend Nancy Meyer – director, filmmaker and screenwriter who created the beautiful interiors for The Intern movie – gave her some tips about finding inspiration on Pinterest and transforming the pin into reality!

Now do not cheat, take a quick look at Diane Keaton’s boards on Pinterest and then come back here to see how she has turned inspiration into reality. 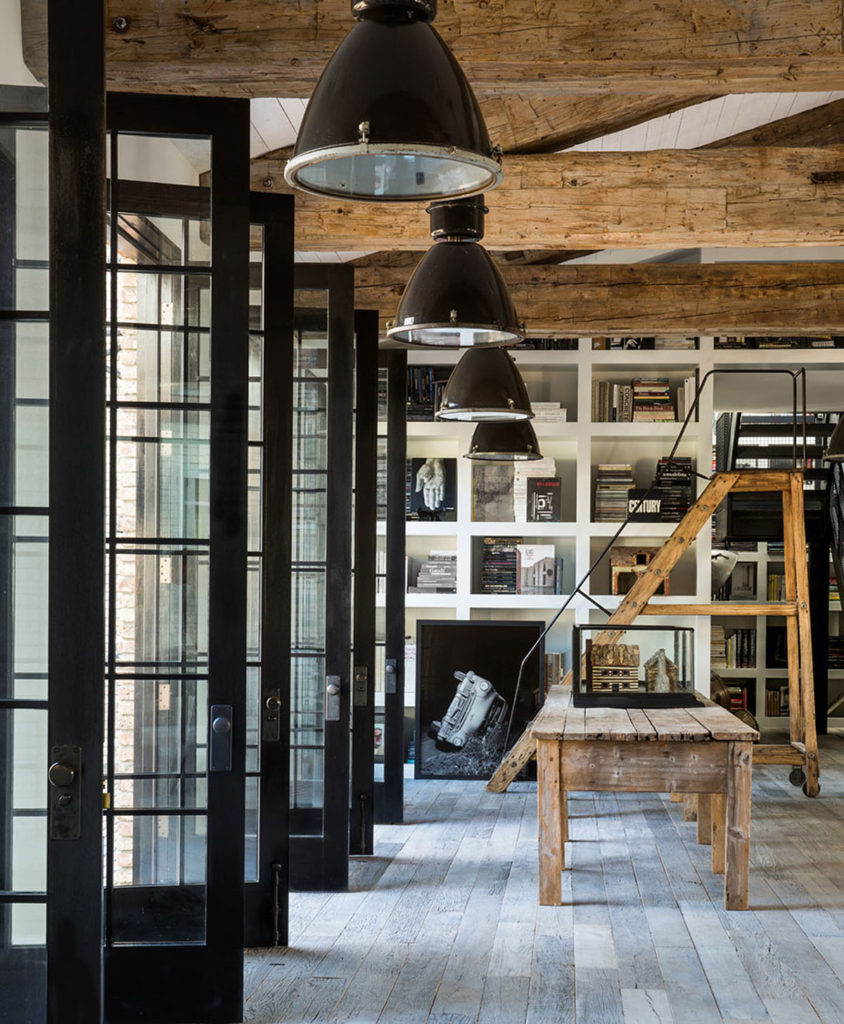 Living doors in the living room of Diane Keaton’s home, for the book The House that Pintrerest. Built Courtesy of Lisa Romerein/Rizzoli 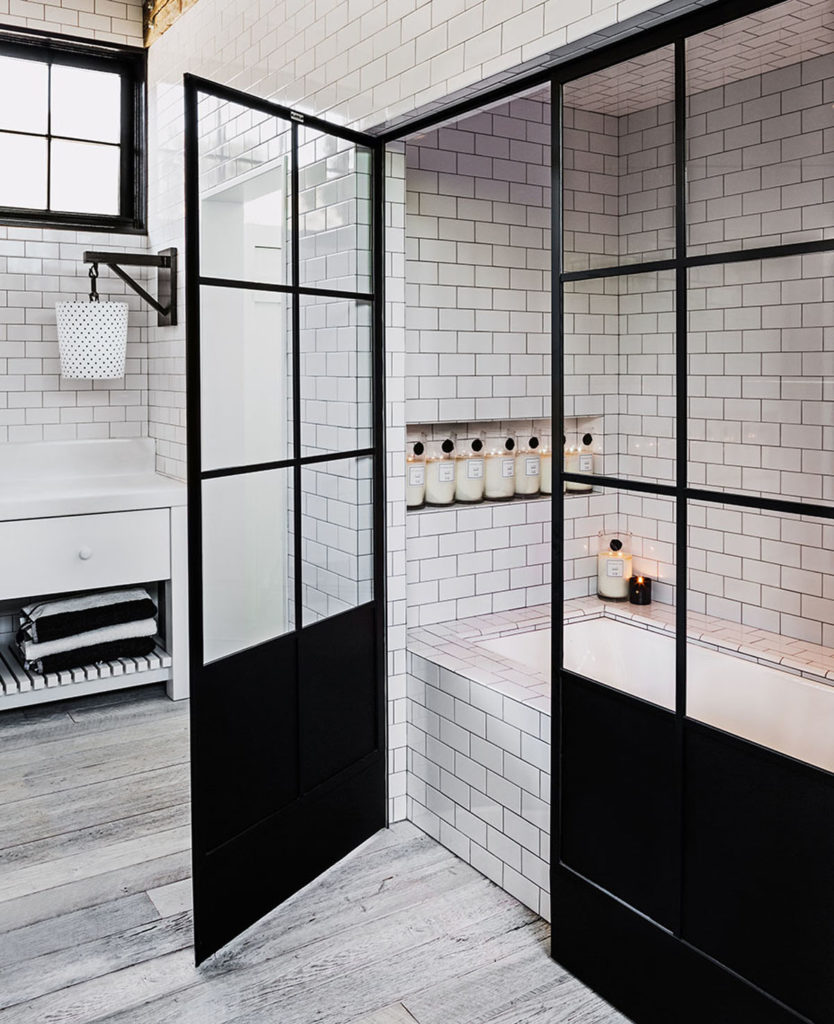 The master bathroom in Diane Keaton home, for the book The House that Pintrerest Built. Courtesy of Lisa Romerein/Rizzoli 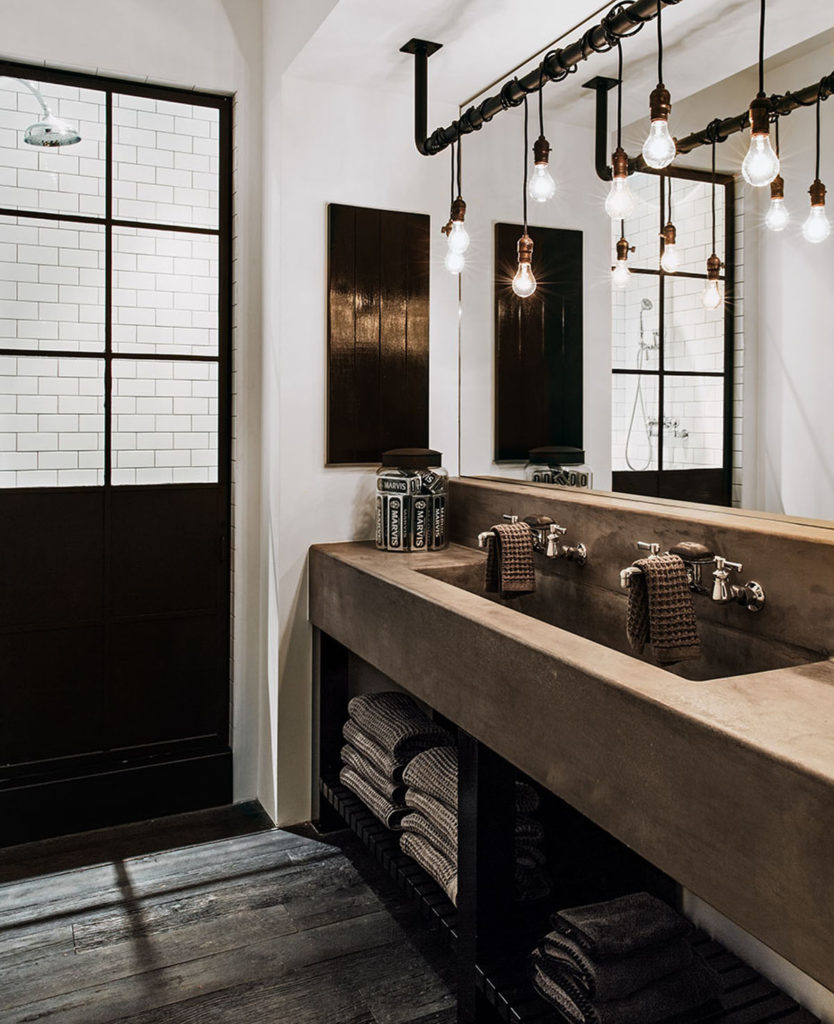 Another bathroom in Diane Keaton home for the book The House that Pintrerest Built. Courtesy of Lisa Romerein/Rizzoli 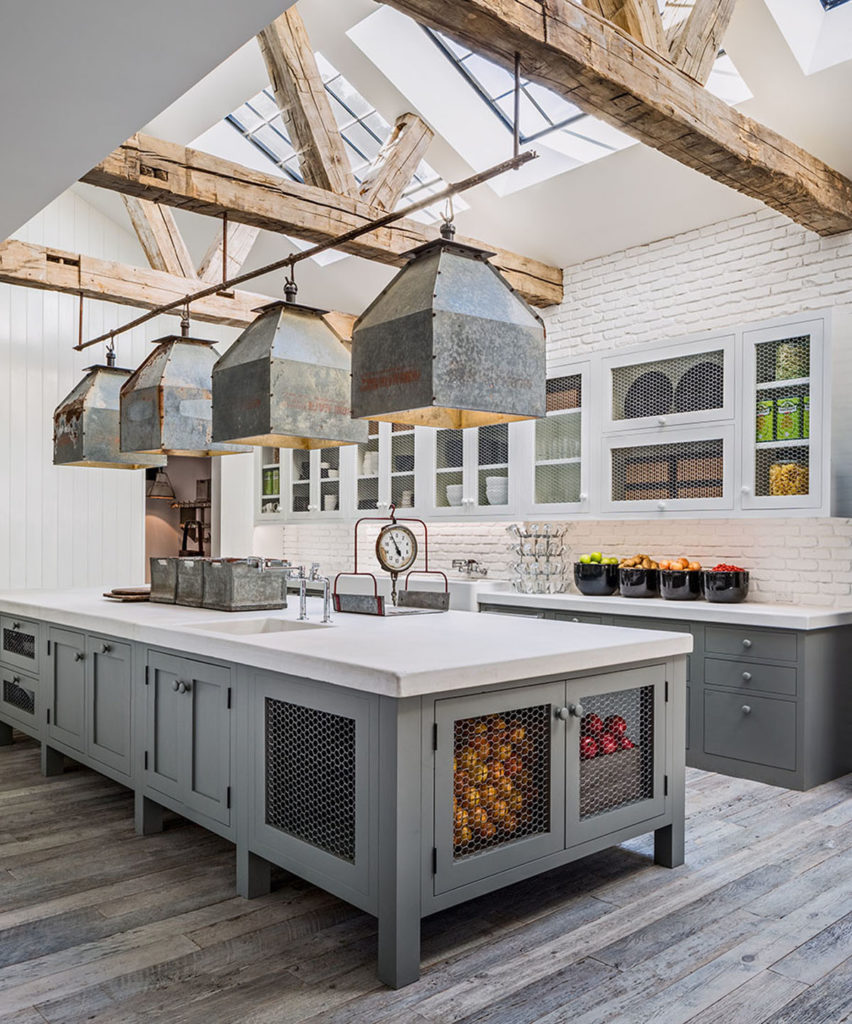 Diane Keaton’s kitchen for the book The House that Pintrerest Built. Courtesy of Lisa Romerein/Rizzoli

It seems still being inside her Pinterest, right? This means she has perfectly made the point. She understood and recognized what she liked, the kind of atmosphere she wanted and the elements she needed to get it. Exactly what I would do at my home but I’m still far from having such clear ideas.

You have to choose a style and stick to that. At the moment, the Pinterest board that I am most proud of because I’m sticking to one style is my fashion style board. and I’m getting there with the one about bedroom inspirations and kitchen inspirations 😉

Pinterest is often called a minor and more women oriented social network. Of course, if we consider the attention to aesthetics and the maniacal desire to put everything in order. Then we could say Pinterest is a female social network with Virgo Zodiac sign. Here I am, I could be the personification of Pinterest!

But this desire to make order and create harmony may tell something more about us and using it to inspire our real life is a sign that we want to put order both inside and outside us. Before the real decluttering or Dan-Sha-Ri (do you know it? It’s another art of tidying up your life, if you’re interested we can talk about it, let me know!) let’s put order in our Pinterest boards, we find ourselves and then we go out, into reality, and put into practice what we have learned and all the inspirations we have pinned! What do you think? Are we in this together?

Diane Keaton “The House that Pinterest Built”, Rizzoli, € 52,77, you can find it on Amazon (first Christmas gift idea?).