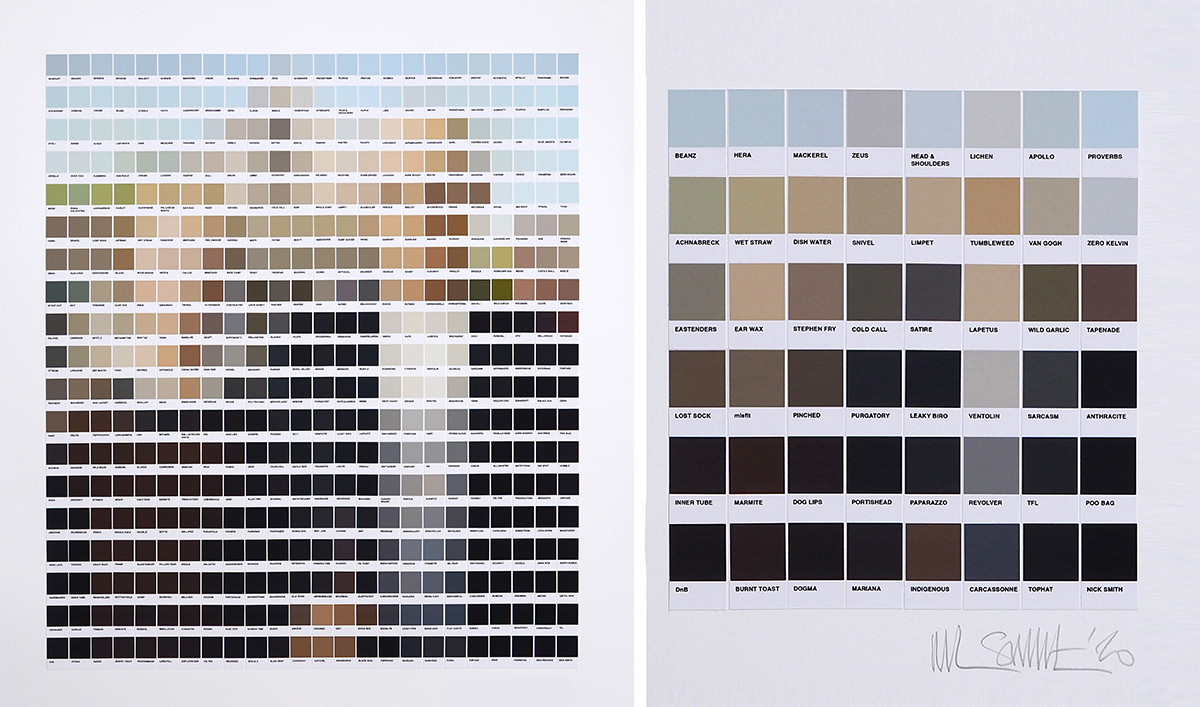 From mosaic tiles to pixels: how Nick Smith transforms the most famous paintings

Raise your hand if you haven’t seen the pixelated portrait of Van Gogh on Instagram in late months. I bet you all know what I’m talking about.
The author of that work that went viral is Nick Smith, an English artist, born designer, who became famous for his “pixelated” works.

We say pixels but we could talk about mosaic tiles. In fact, Nick Smith creates collages with colors. He opened, a few days ago, his “Pioneers” exhibition at the London art gallery Rhodes Contemporary Art (until November 28, 2020) which brings together a series of works inspired by the most famous paintings of the 20s Century American art such as those by Rothko, Andy Warhol, Keith Haring, Edward Hopper, Chuck Close. Among these there is also the “American Monnalisa”: “American Gothic” by Grant Wood (1930), perhaps the most emblematic painting of American art.

His paintings play with a double perspective. You have to stand a few steps away from the painting if you want to catch the whole image, but it is only up close that they reveal their true nature.

The “pixels” or rather, the mosaic tiles, are actually “color chip”, the ones that are used by graphic designers and designers to uniquely identify colors.
Each color is identified by a color code and a name. This very name on the bottom of the chips adds another level of reading to the works of Nick Smith. 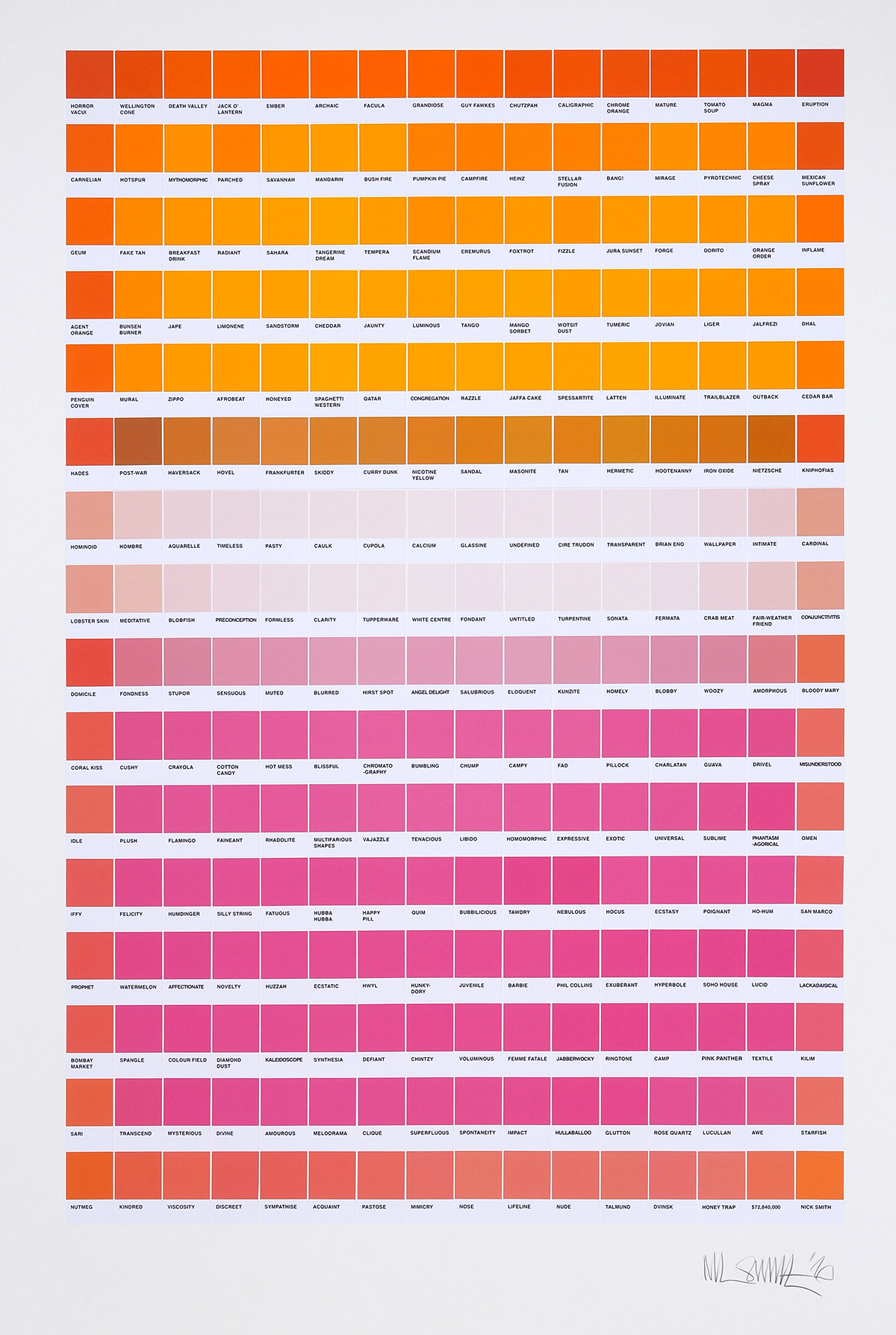 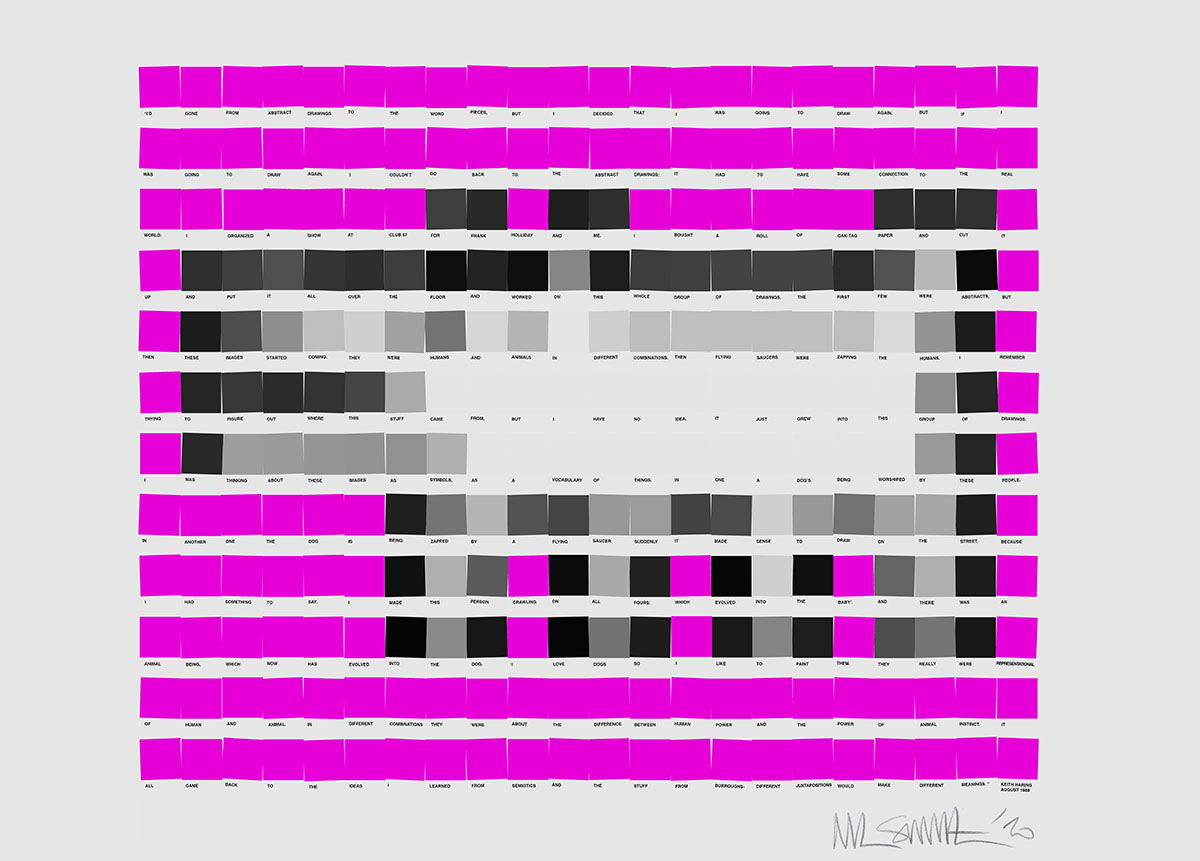 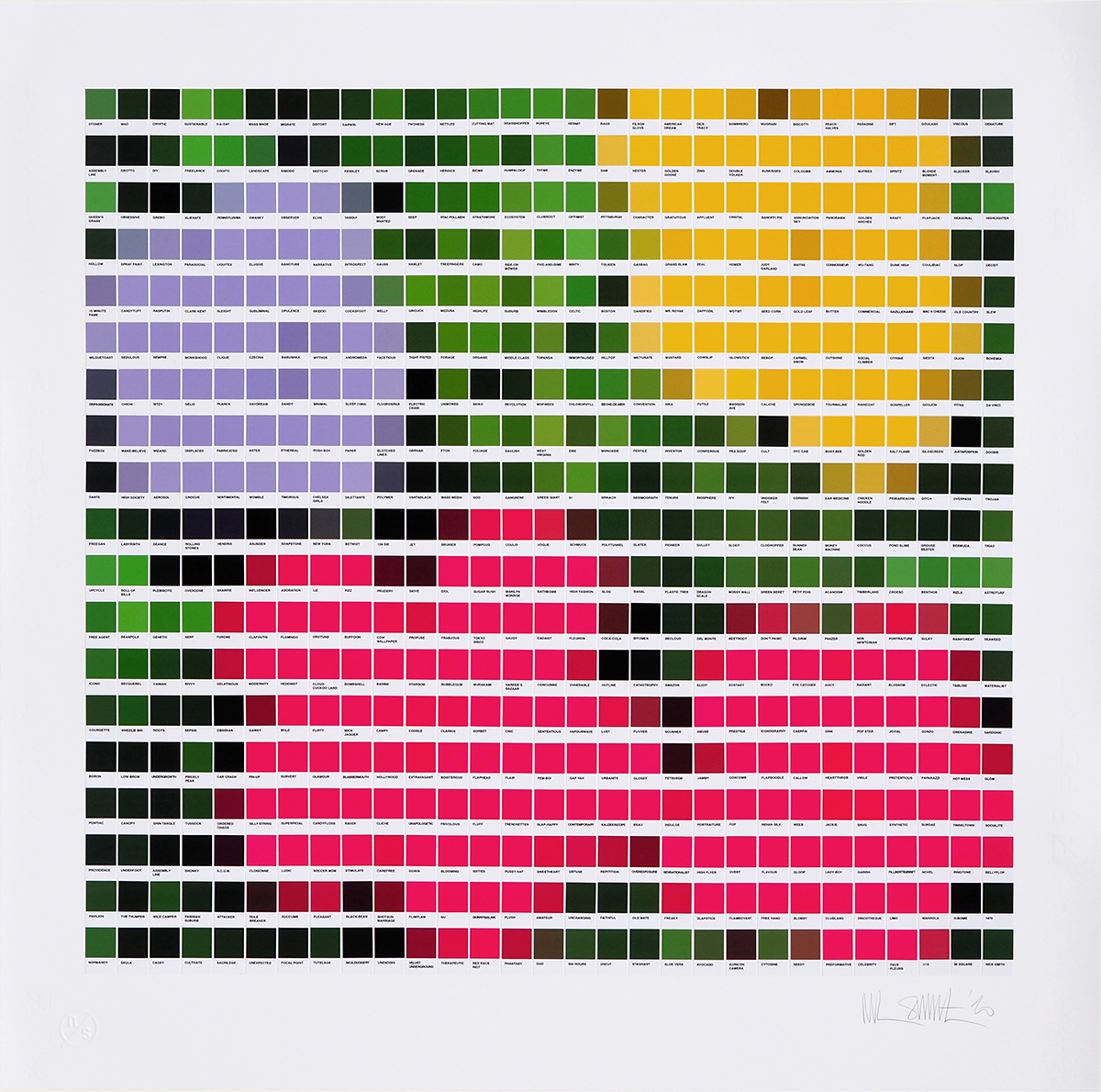 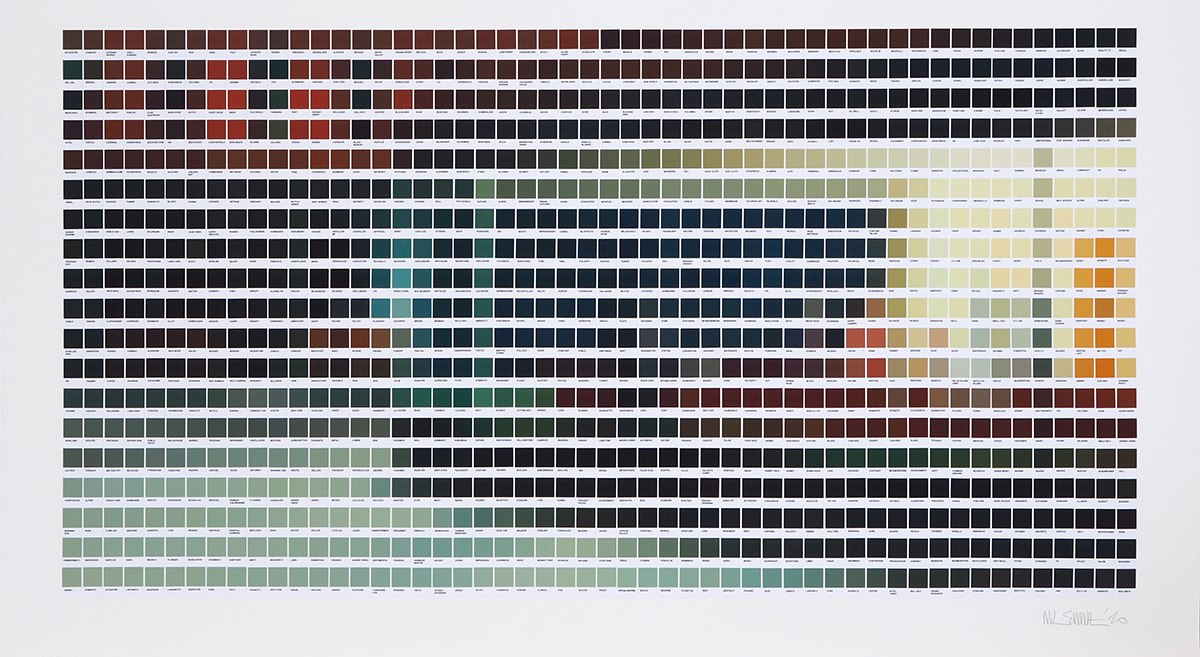 If you come close you lose the overview and immerse yourself in details and colors, from this short distance you’ll be able to read the various names of the colors that become a sort of Dadaist text. The various names linked together in the composition, give life to a text in a sort of random creation. 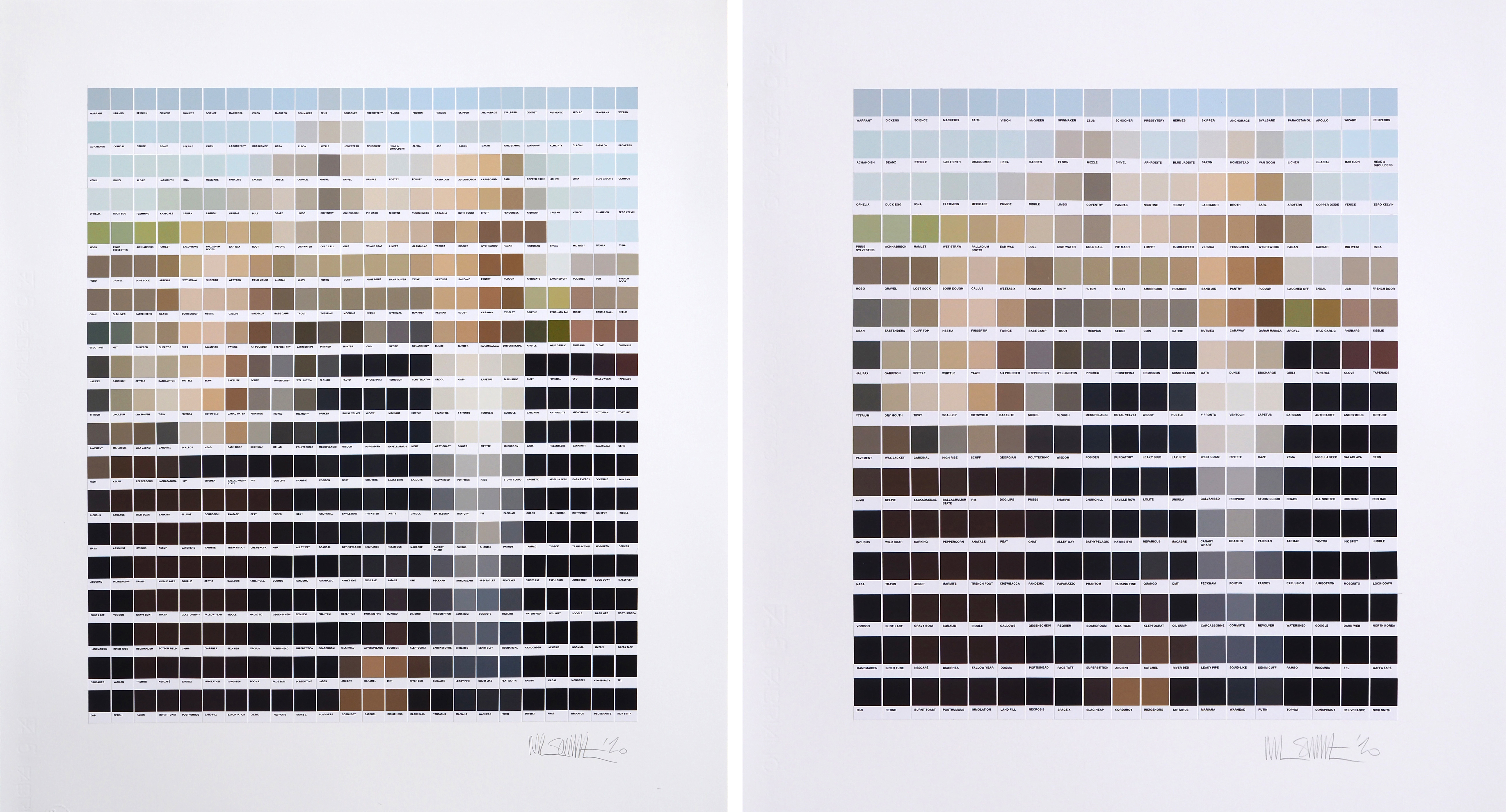 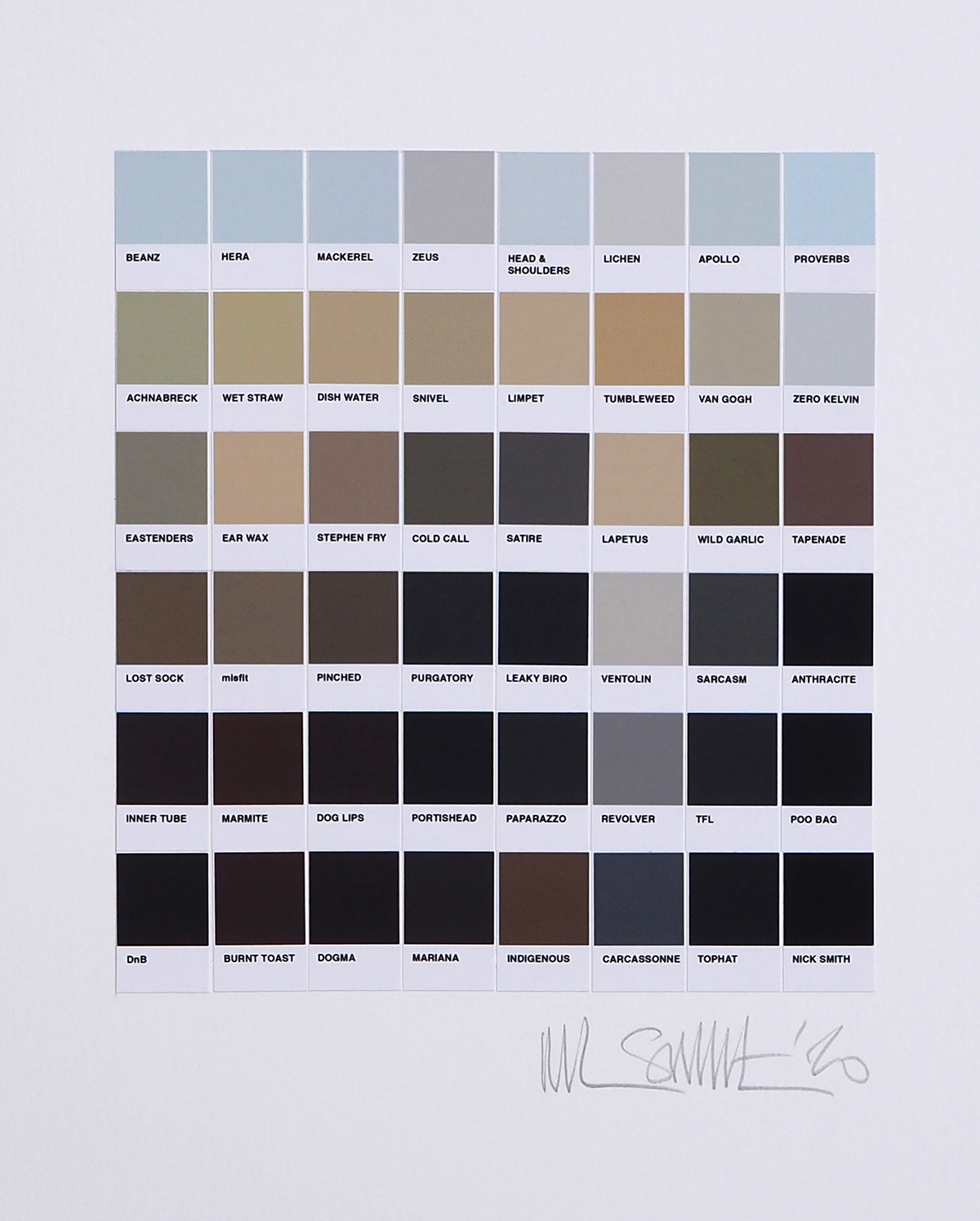 I also like that he indicates the number of tiles he used to make the work!

If you want an idea of the prices, I have good news, in addition to the original collages there are also limited edition prints, look on the Nick Smith website, the print inspired by “American Gothic”, 79×83 cm, edition of 150 copies, is on sale by Rhodes Contemporary Art at 436 €.

If you want to find out more about Nick Smith, you can listen to the podcast “Nick Smith talks Atwork, Psycolourgy, America & More”.