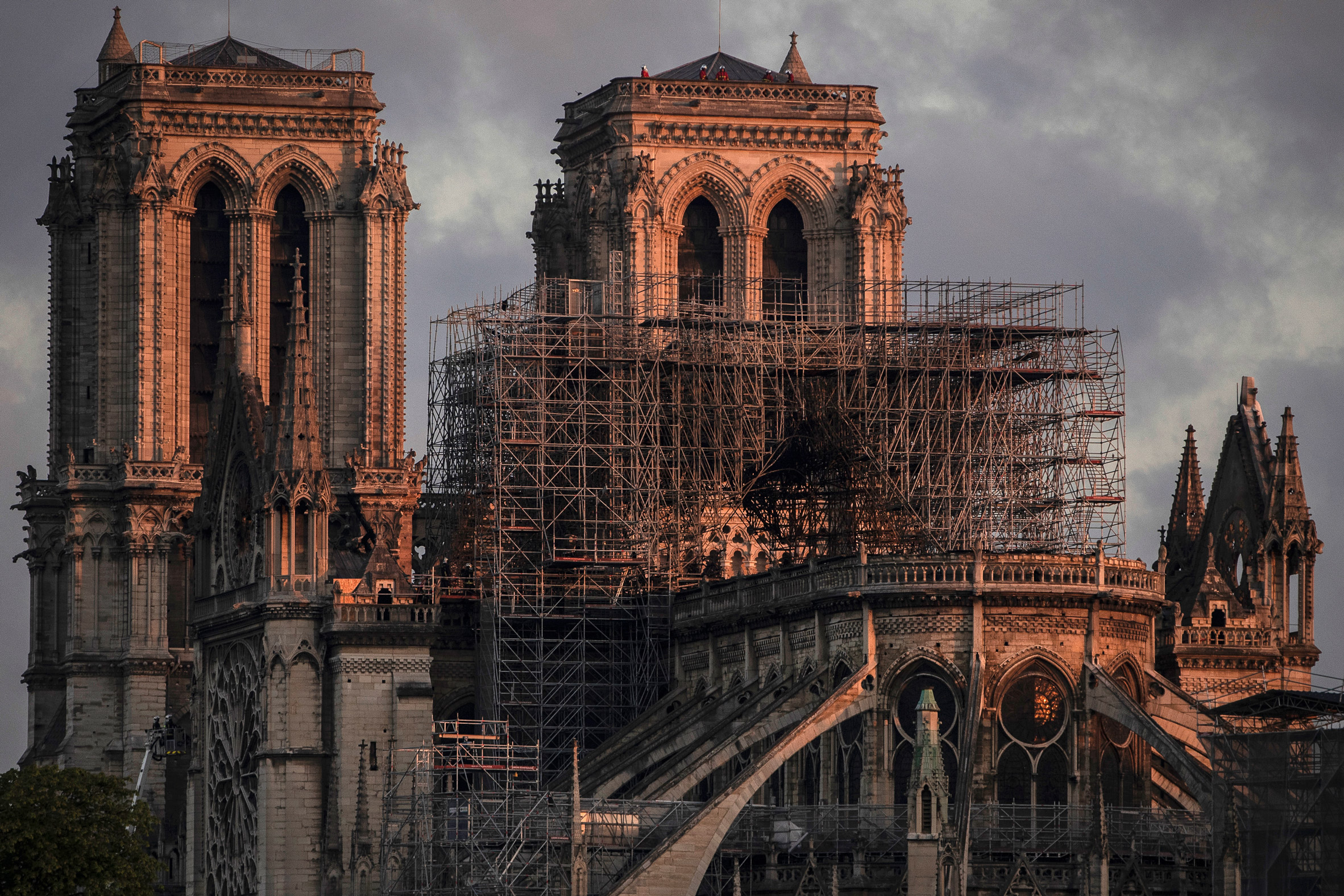 Notre Dame after the fire: it’s time to rebuild it

On 15 April, the Notre Dame Cathedral in Paris was hit and severely damaged by fire.

It could have been a tragedy, the cathedral could have collapsed and gone entirely lost. Thankfully, however, it resisted but the building spire and roof are lost while the main structure remained intact. French Prime Minister Edouard Philippe made the announcement to choose the architectural firm that will rebuild the destroyed parts.

Reconstruction gives us the opportunity to think about what “rebuilding” means and leads us to consider carefully how to intervene on a historic building of such symbolic and artistic importance.

It is a huge decision choose to intervene by rebuilding in style – as Viollet-Le-Duc would do – or make a contemporary intervention that emphasizes the “scar” of Notre Dame. This type of intervention becomes explicit, evident, an addition in contemporary language to a much loved historical context.

It is very difficult to decide which is the best way to go. Notre Dame is a symbol to which we are all fond of and which we would all like to see as it was. We would like the cathedral will come back to its place among the most beautiful and romantic views of Paris and that everything returns as it was. But nothing can come back as it was… it would be a rebuilding in style, this would surely be the road that Viollet-le-Duc would have taken.

Viollet-le-Duc was a French Gothic Revival architect, in opposition to the intransigent purist faction supported by the Englishman John Ruskin, according to which any later intervention or restoration was to remain evident and recognizable. Viollet-le-Duc instead supported a type of intervention that followed the artistic and architectural techniques of the time, with the aim of bringing the building back to its ideal state (what he thought was the original).

«To restore a building is not to maintain it, repair it or remake it: it is to re-establish it in a complete state which may never have existed at any given moment.» Viollet-le-Duc, Dictionnaire raisonnè d’architecture

For this reason Viollet-le-Duc is also called “the man who reinvented the Middle Ages”. An example of works? Carcassonne. After years of wealth and fame between the thirteenth and sixteenth centuries, the citadel was so in ruin that in 1849 the French government considered its demolition. They choose instead its reconstruction following the Viollet-le-Duc’s theory.

Also Notre Dame was restored and rebuilt by the neo-Gothic spirit of Viollet-le-Duc. A massive intervention that touched the façade, buttresses, pinnacles, statues. With the aim of bringing the cathedral back to its original medieval appearance, subsequent artistic and architectural interventions have been eliminated. There were also additions: frescoes in the side chapels, rebuilding and in 1858-1859 the flèche was rebuilt, exactly the spire that was destroyed in the recent fire. 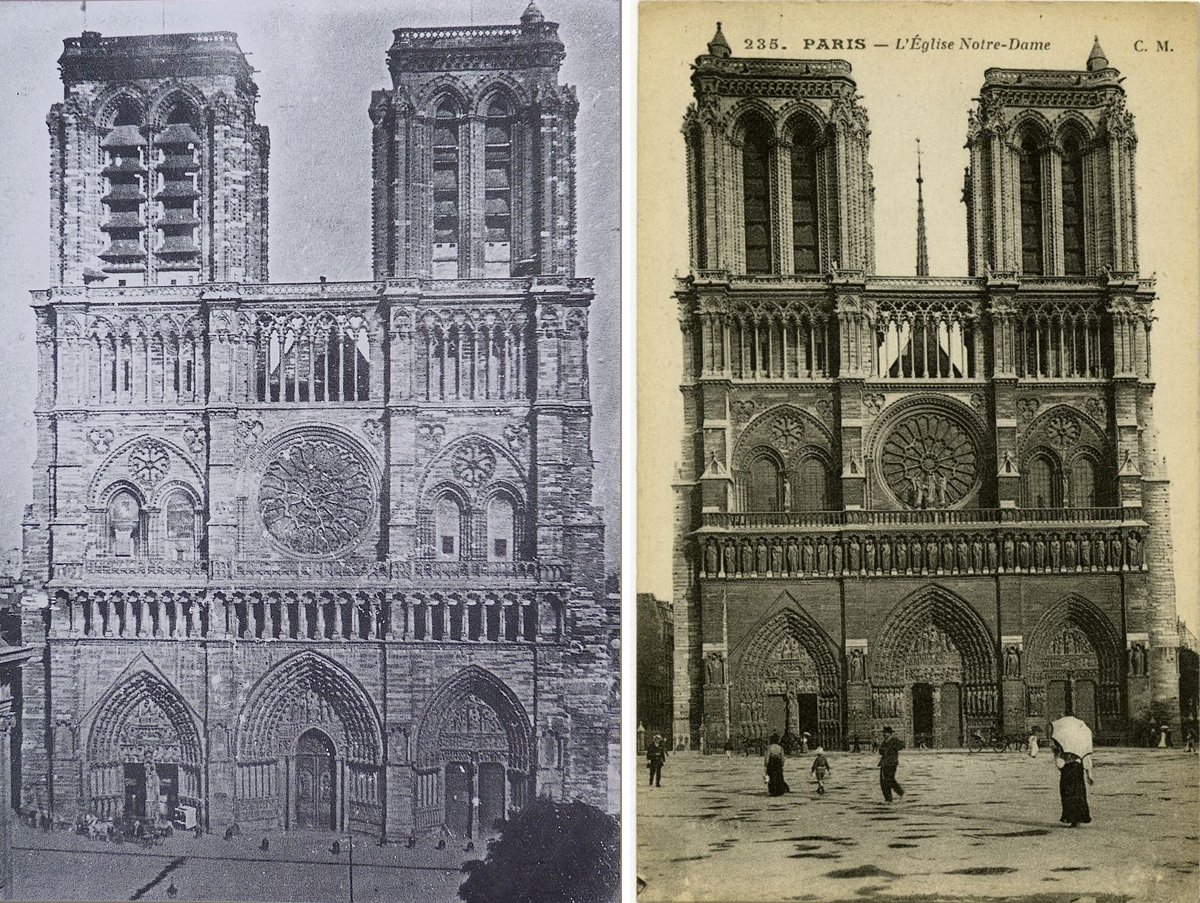 On the left a daguerrotype of the Notre Dame façade before 1841 and, on the left, a photo from 1916 ca, after the Viollet-le-Duc’s restoration.

The spire of Viollet-le-Duc was lost in the fire, not the original medieval. The wooden structure of the roof, yes, that was still original.

On the other hand choosing to rebuilt the most famous church in Paris – perhaps of the world – with a contemporary look will make a lot of people scream (you can easily recognize them with a simple question: what do you think of the Louvre pyramid?), the Viollet-le-Ducs of our time, those who prefer an invisible restoration.

Meanwhile architecture firms from all over the world are having fun proposing visionary and even imaginative (and nightmare) projects: 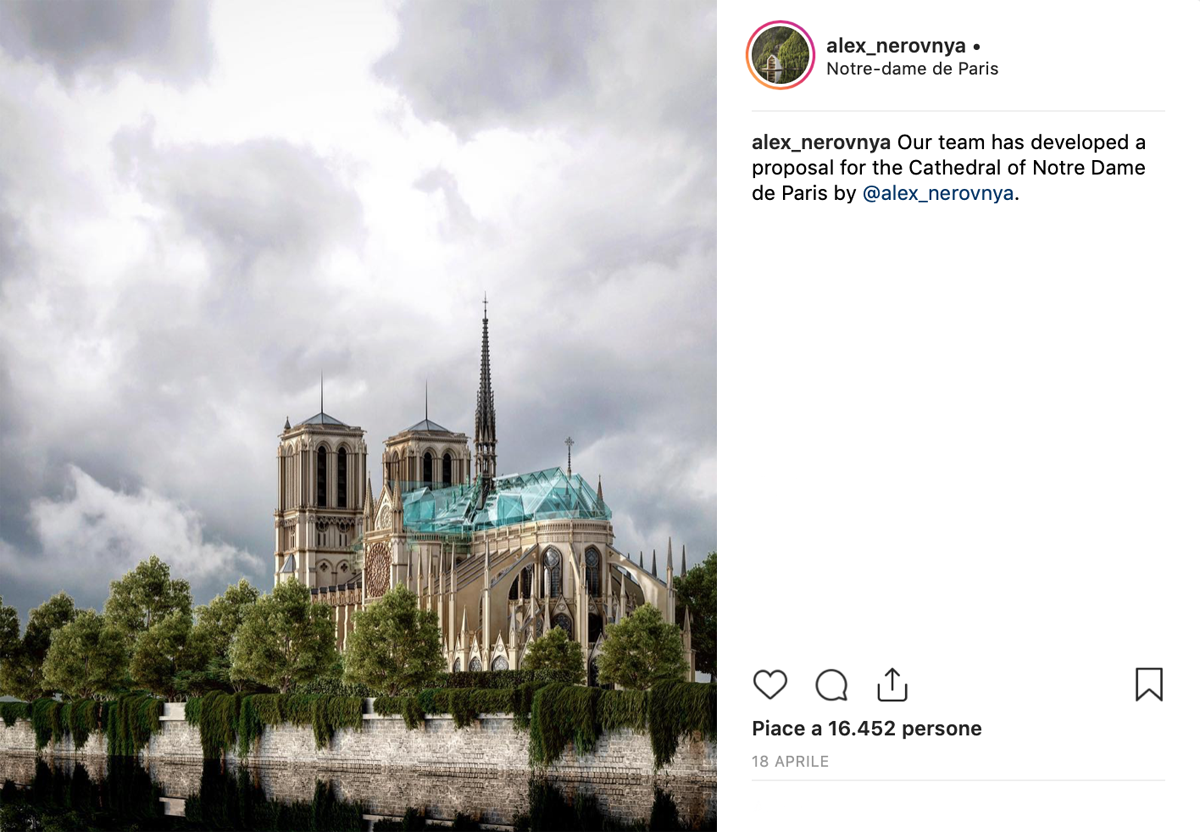 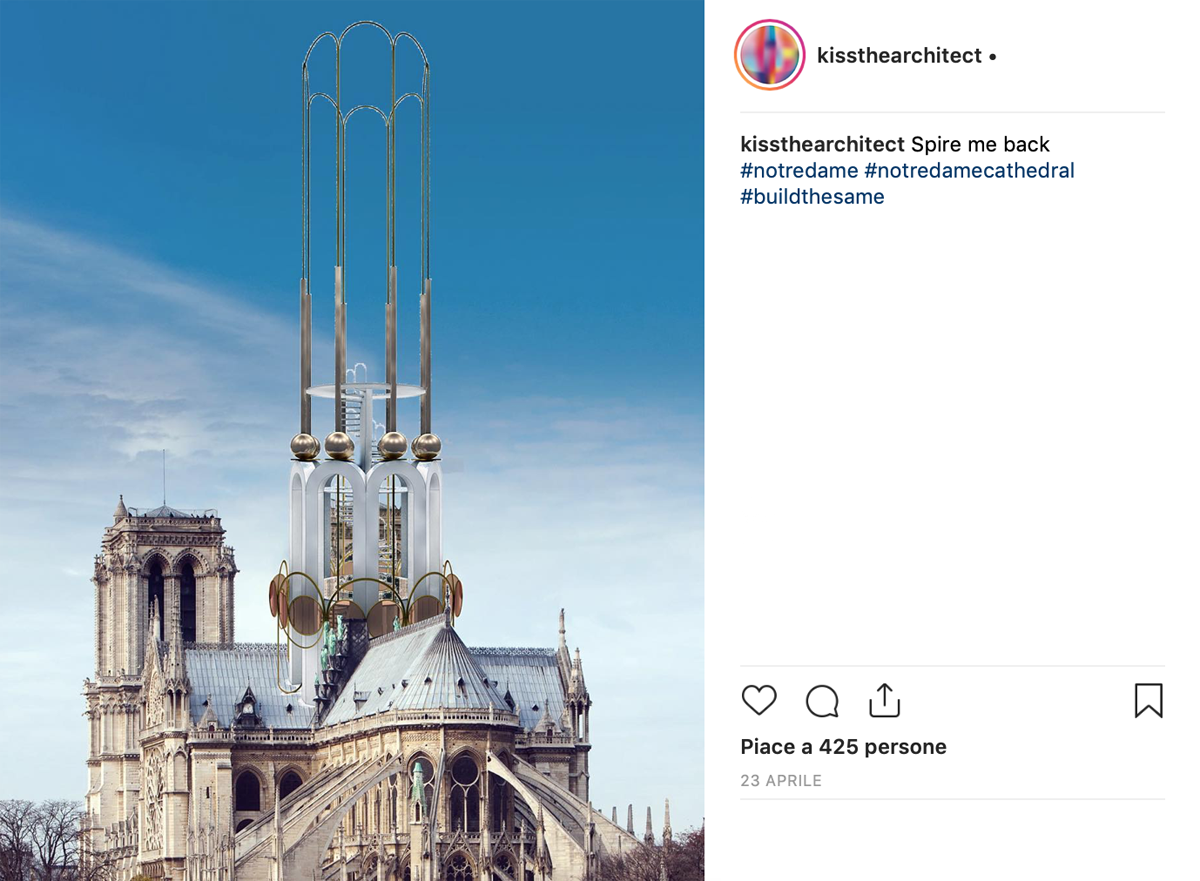 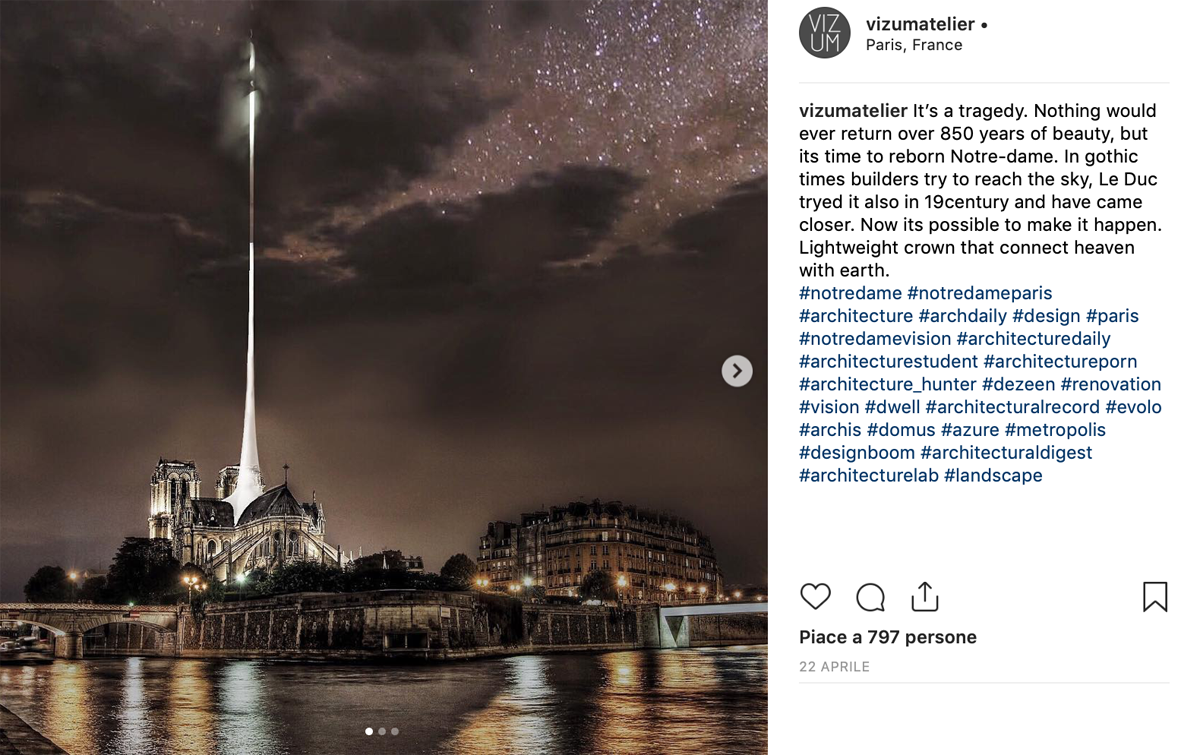 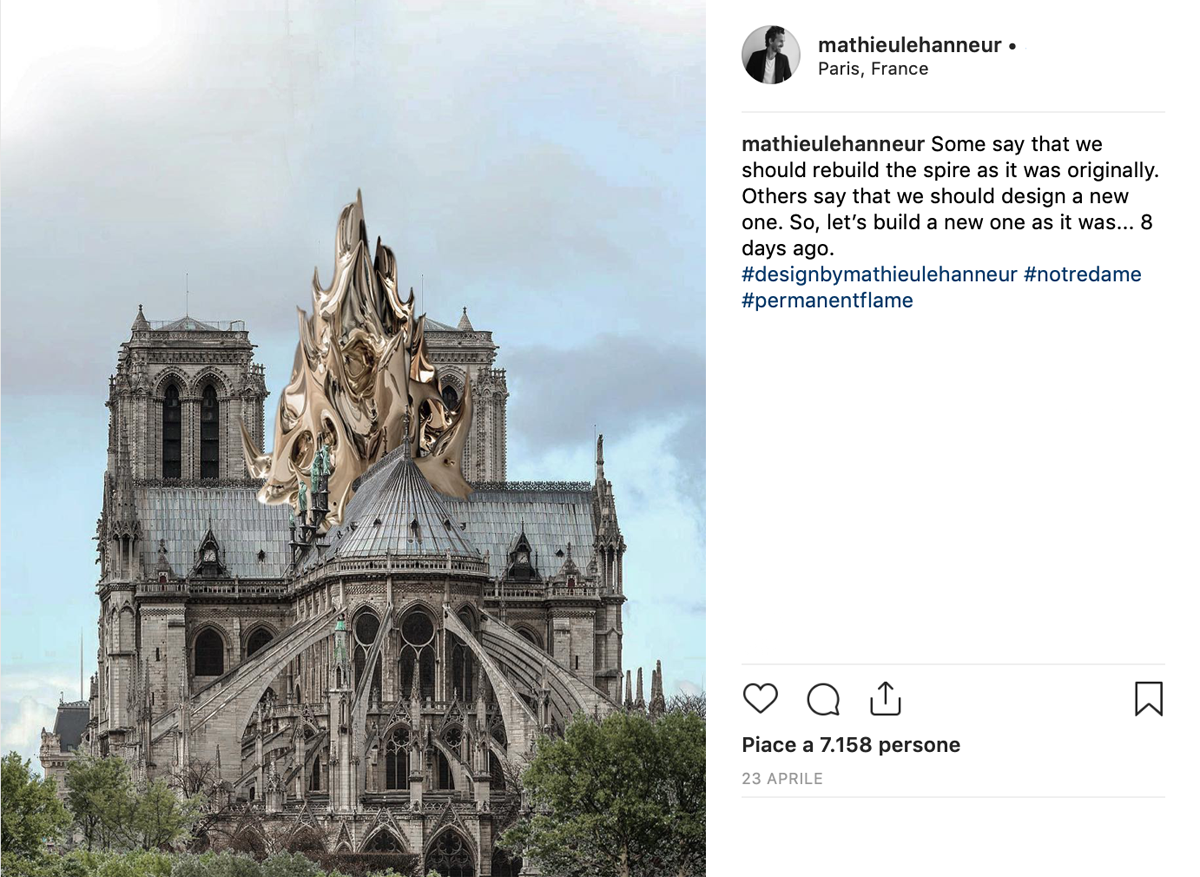 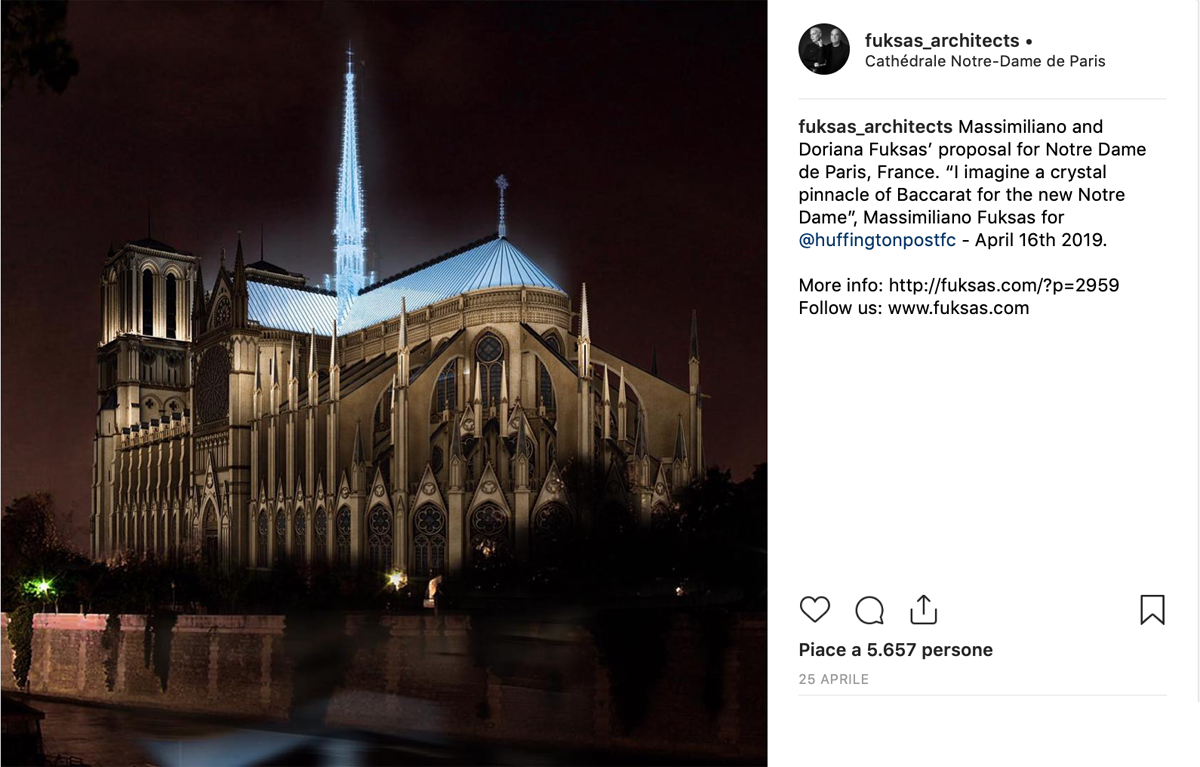 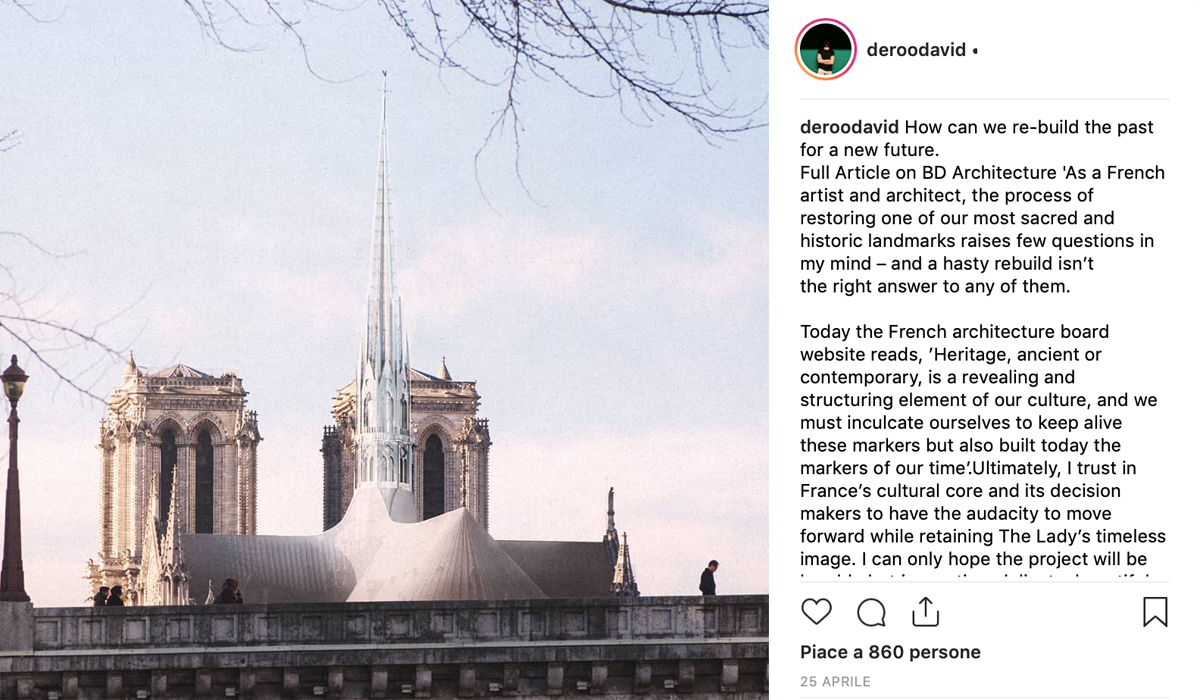 Perhaps for a symbolic building like Notre Dame I would also be more for a conservative restoration but I would also be in favor of a modern intervention on tiptoe. Nothing invasive, no construction that catches the attention, it doesn’t have to become a show-off, it’s not about remembering, for me this kind of reconstruction doesn’t have the value of Ground Zero (where the absence becomes thunderous!).

Notre Dame is first of all a church, one of the symbols of Christianity, and for this reason it must be respected without distorting it. I’m liking wonderful projects that include a glass roof with a botanical walk above the aisles, but maybe not the spire with beehives. Long live to biodiversity but not in the spire of Notre Dame. 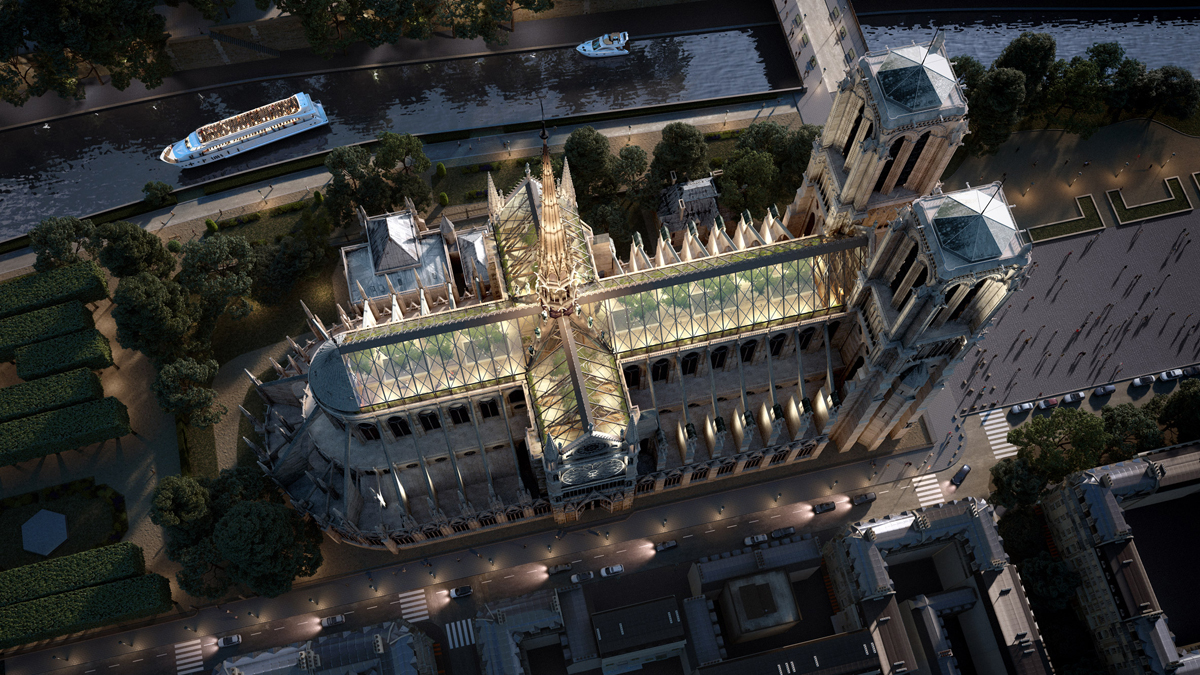 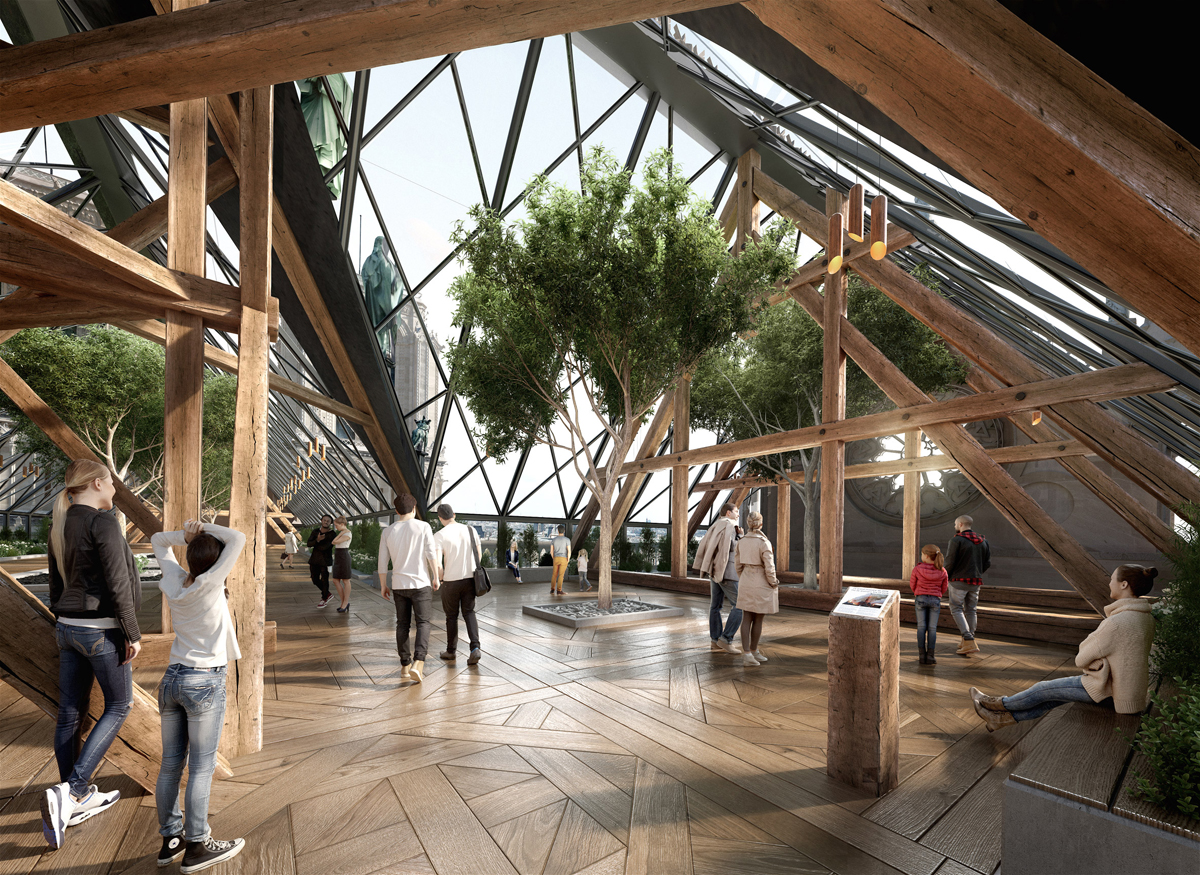 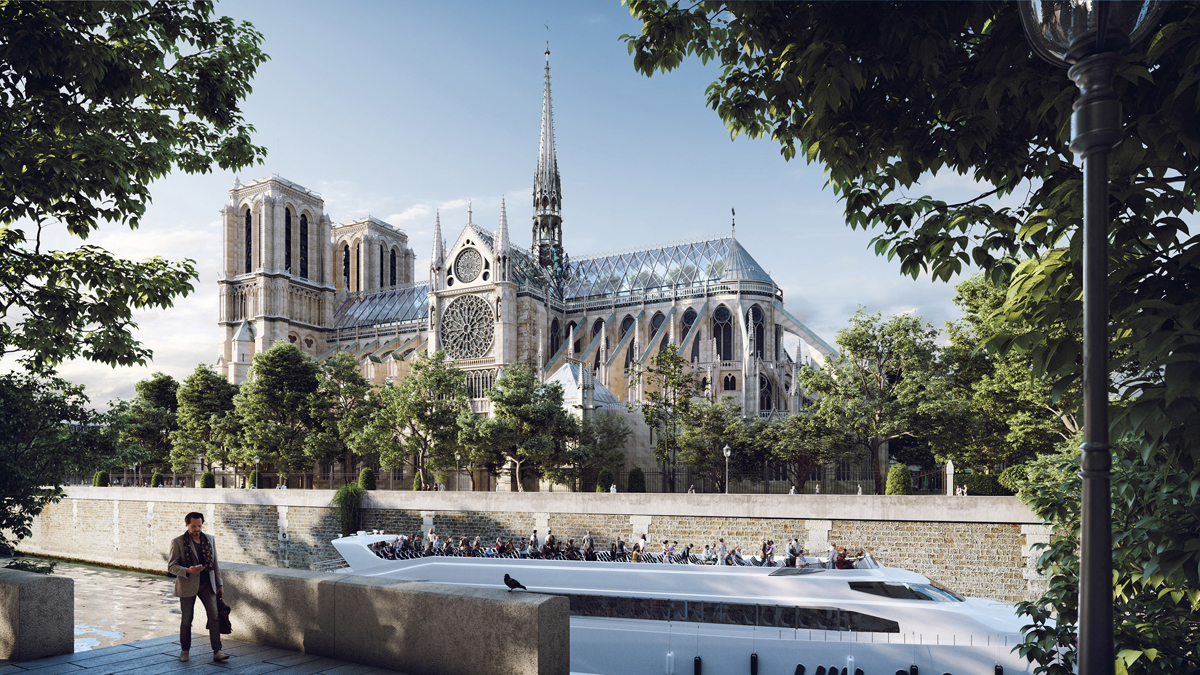 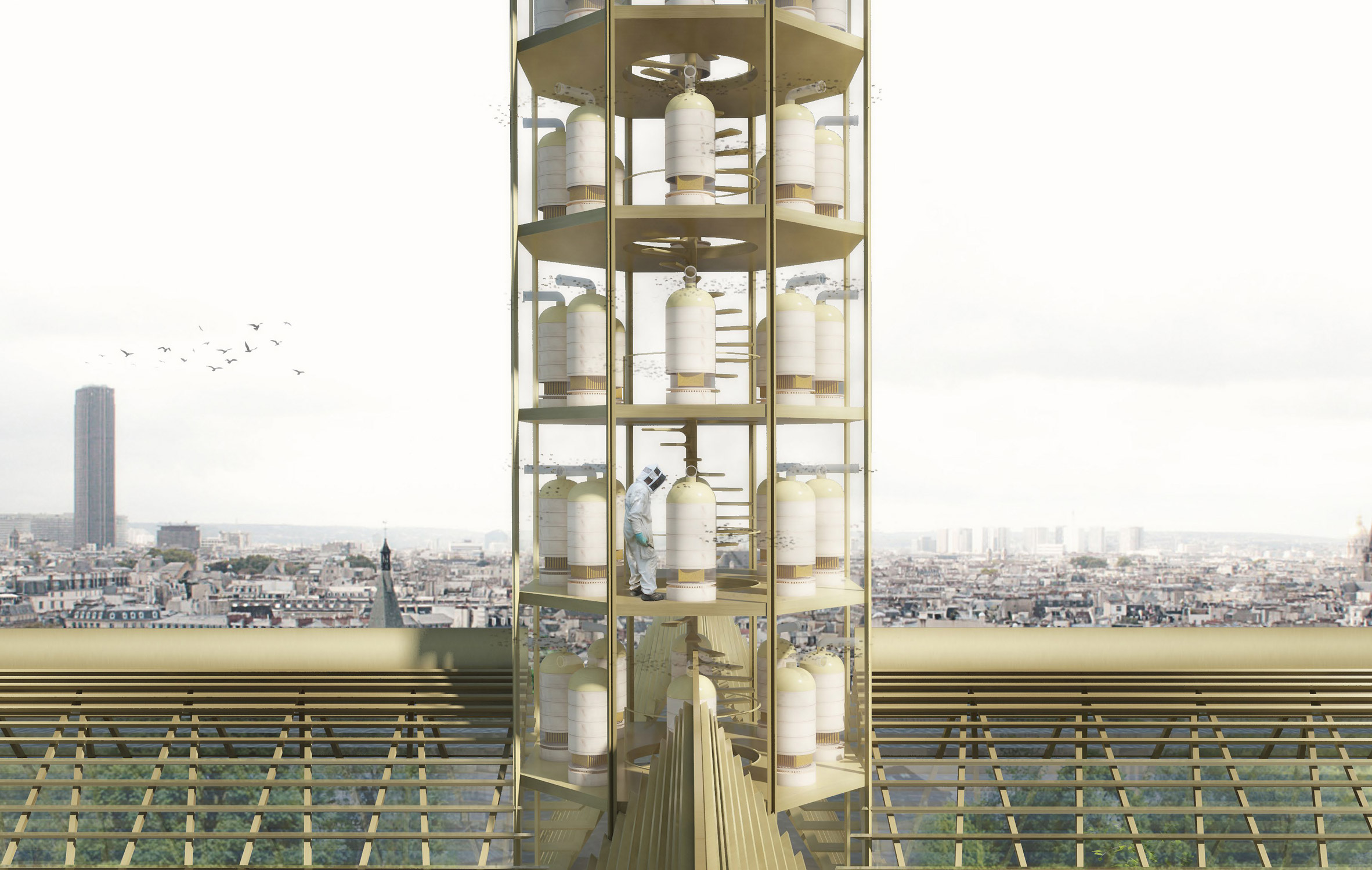 In the Paris-based Studio NAB’s project instead of a spire, the roof would be topped with a tower of beehives… 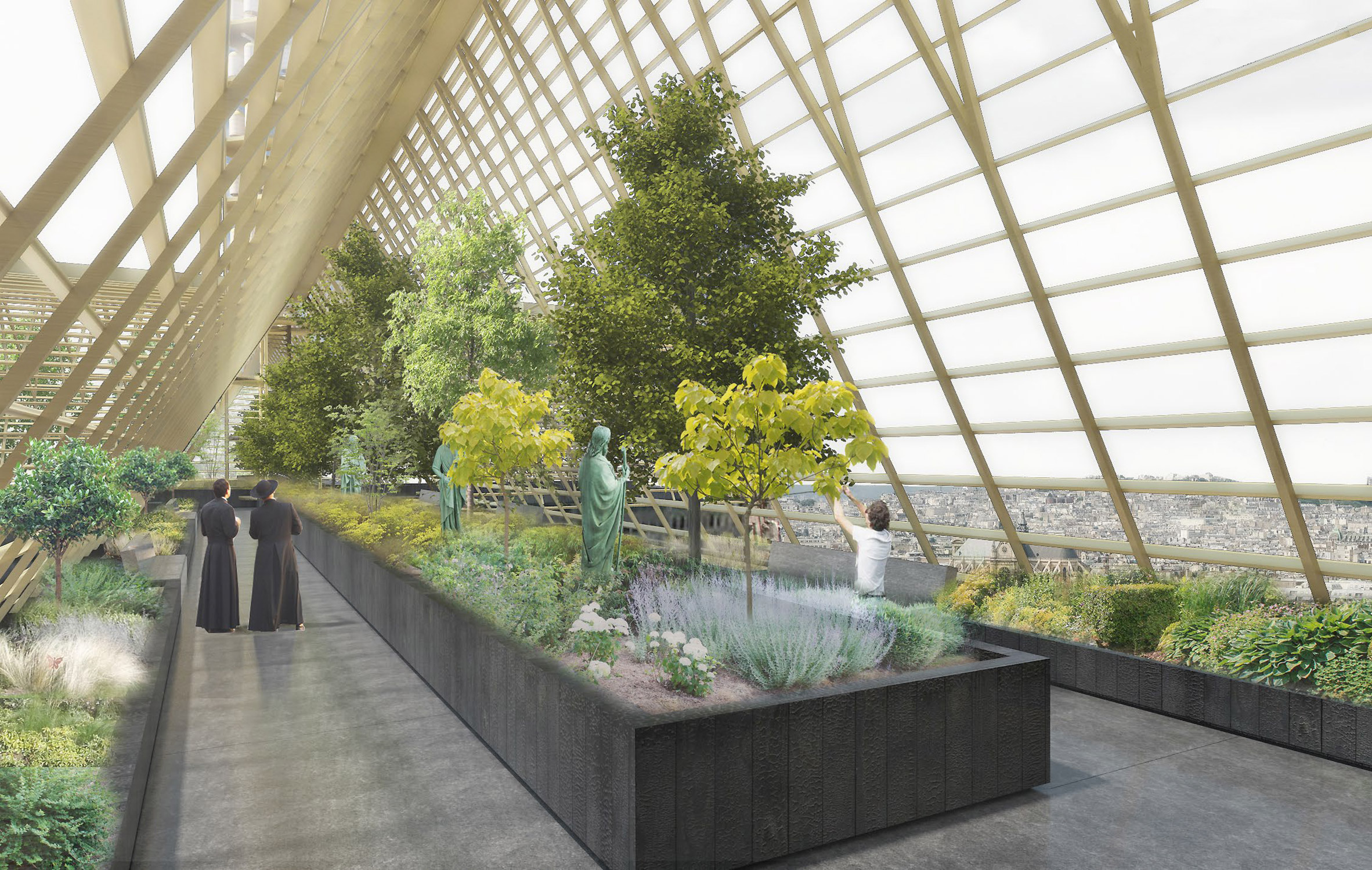 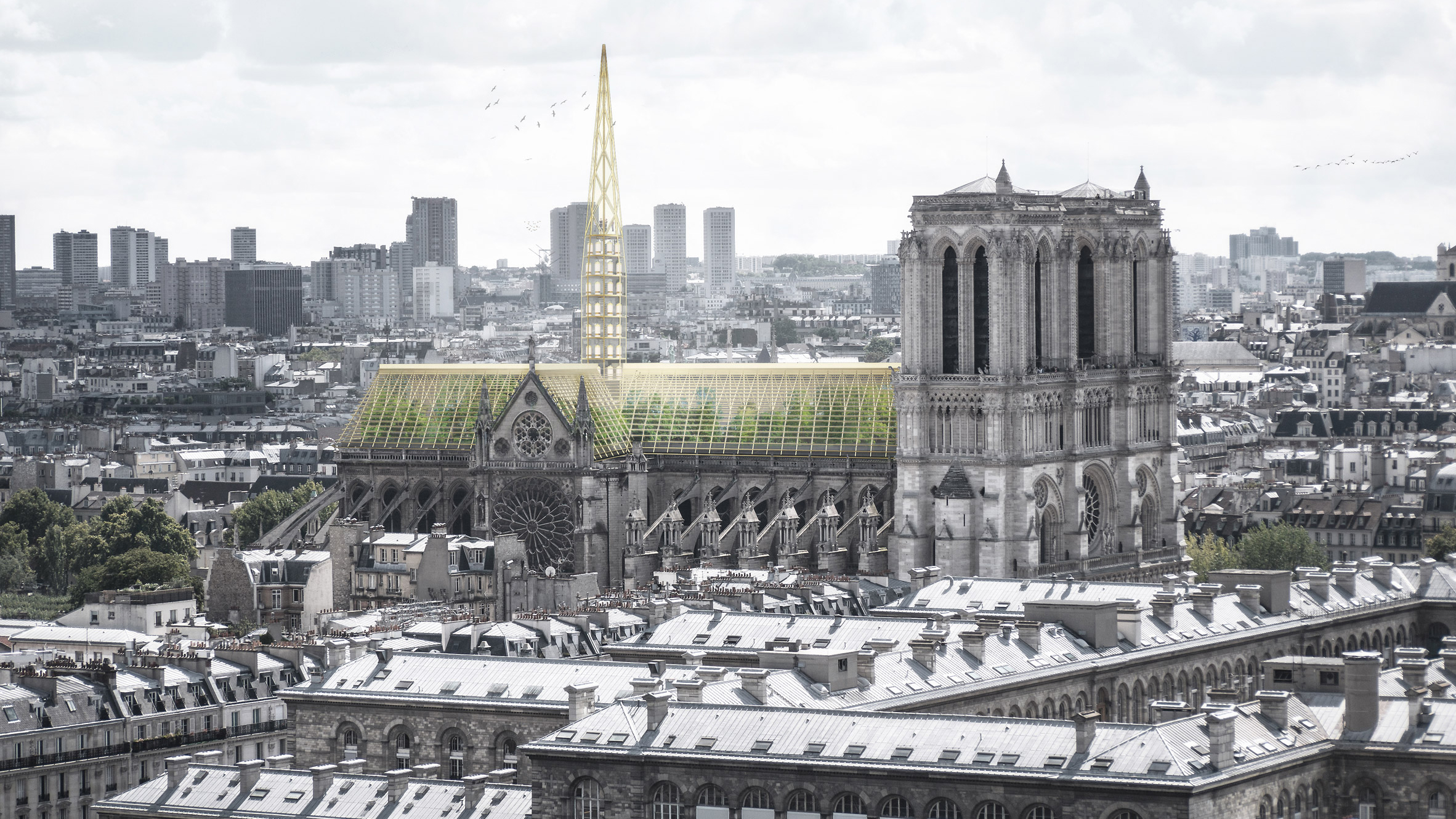 What do you think about it? Are you more for a restoration in style or for a modern intervention that stands out?

P.S.: I love the Louvre pyramid!