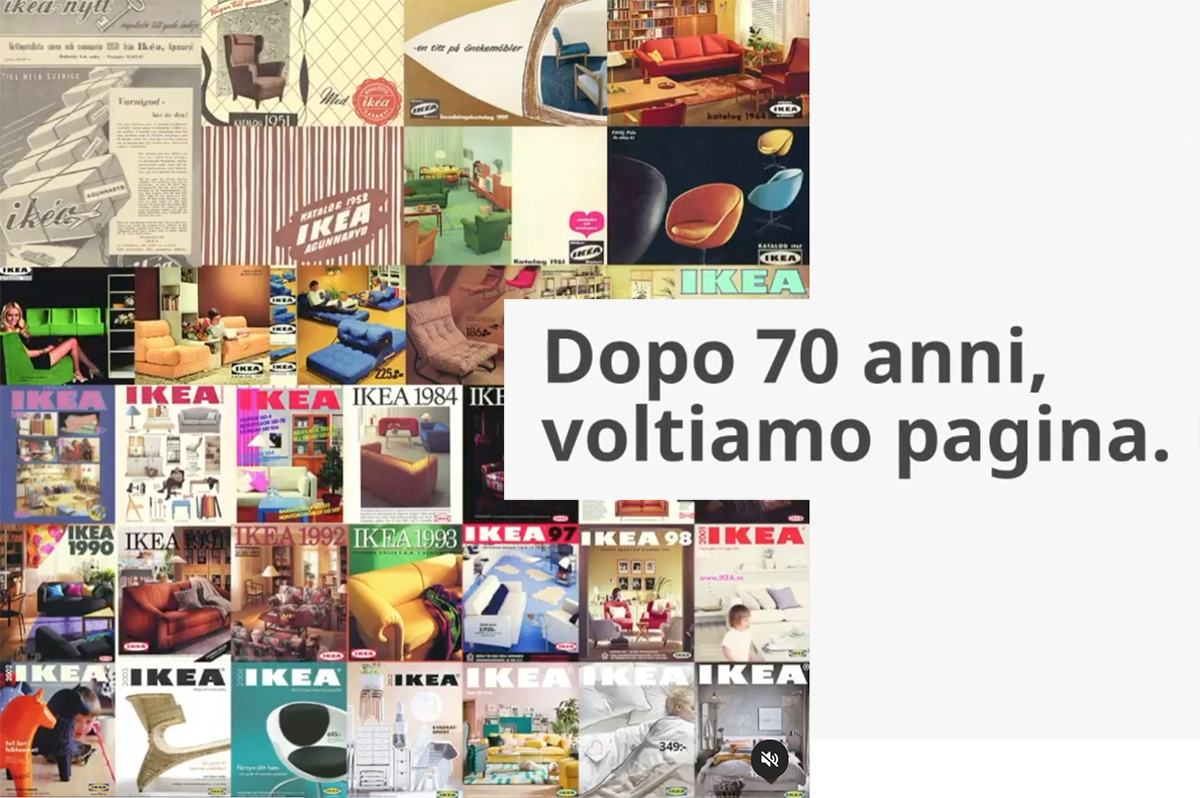 Why Ikea is ending its iconic catalog and what to expect

An era is over: a few days ago Ikea announced all over the world that its iconic catalogs will no longer exist. No more printed catalogs or even in digital format.

The decision comes from the Swedish headquarters: “For both customers and collaborators, the Ikea catalog is a publication that brings out many emotions, memories and joy. For 70 years it has been one of our most exclusive and iconic Ikea products, which has inspired billions of people around the world. It has actually been a natural process since media usage and customer behaviors have changed.” Konrad Grüss, CEO of Inter IKEA Systems B.V.

At Ikea they are communication geniuses, I’m sure they will have excellent ideas for the future. This is the Instagram post released on Ikea UK’s profile to announce the end of the catalogs:

We costantly look for inspiration and new trends, this new velocity made obsolete a tool like the catalog that remains the same for a whole year.

Ikea has always been projected towards the future, the time is right for a great change: to reach and inspire the majority of people around the world they need a new tool other than the catalog.

Not only the way we use the catalog has changed, but also the purchasing behavior. In the last year (also thanks to a pandemic…) online sales for Ikea have grown by 45% all over the world. The Ikea.com website has received more than four billion visits.

A new catalog creates every year great expectations but after the initial enthusiasm it is faster to do an online research than browse the catalogue.

I think we should expect news on-line. Have you noticed that the Ikea website has also changed in recent months? It has been enriched with many inspirational images, almost like a Pinterest board.

Ikea has also launched the first digital store: a virtual showcase available on the Ikea.it website where you can move exactly as if you were inside the physical store.

You can take 360 ° virtual tours and can also be used with virtual reality viewers. Then you’ll need just a click to buy everything you want… will this be the future that awaits us?

Ikea will no longer present catalogs but I am sure they will continue to create content and images to inspire us and help us find solutions for our homes, today even more important because of the amount of time we spend at home. The tool will change in order to reach and interact with even more people on a daily basis.

You know that I have a very special relationship with Ikea, I asked them few questions and they gave me a big news: in Autumn 2021, there will be no catalog but they will release a book!
It will be the first year, after 70 years, in which no catalog will be presented, but the tradition will be celebrated with the release of a book full of inspirations, ideas and advices improving our homes.
This is nice even our beloved Ikea catalog, as we know it today, will no longer be there. Dear Mark Zuckerberg, it’s your fault.

5 things about Ikea catalogs that you may not know:

In 1951 Ingvar Kamprad, the founder of Ikea, created the first catalog with the MK armchair on the cover (evolved into today’s Strandmon, now a great classic). 68 pages in Swedish only, printed and distributed in 285,000 copies just in southern Sweden.

In 1998 the first Ikea catalog was published on the internet but for technical problems only the “office” part was loaded.

In 2000 Ikea launched the paper and digital version of the catalog.

In 2001, Ikea’s first e-commerce was opened, only in Sweden and Denmark.

The 2016 catalogue was printed and distributed in 200 million copies, in 69 different versions, 32 languages and in over 50 markets.

For 70 years the catalog has been an important marketing and communication tool with which Ikea has literally entered in every home with door-to-door distribution.

Ikea not only educated us in the Nordic style, but made us learn to love the home, stimulated interest in the world of furniture and certainly also to consider furniture as less definitive. Thanks to democratic prices, our homes have started to change faster (this certainly opens up a reflection about sustainability, but we’ll talk about it another time). Ikea has certainly experienced a lot of “first times” with us. For me and my husband Ikea was truly the perfect companion creating our “first home”.